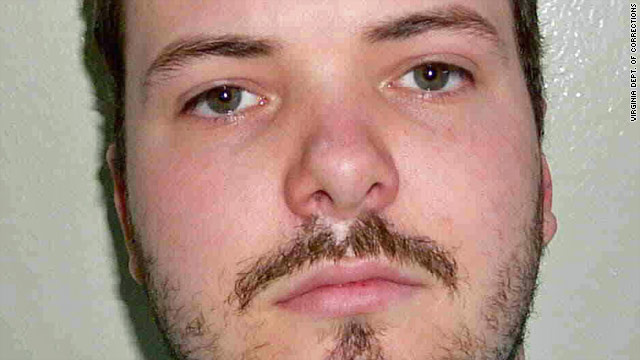 Paul Warner Powell taunted prosecutors when he thought he was ineligible for the death penalty.
STORY HIGHLIGHTS
RELATED TOPICS

Washington (CNN) -- The murderer of a 16-year-old girl was denied a hearing before the Supreme Court on Monday, after a letter bragging about his crimes got him a cell on Virginia's death row.

Without comment, the justices rejected Paul Warner Powell's appeal. Powell was convicted of the murder of Stacie Reed and the rape of her 14-year-old sister in their Manassas, Virginia, home in 1999.

Powell had claimed double jeopardy after state prosecutors put him on trial for a second time in the killing. The high court delayed Powell's execution in July and agreed to consider his broader constitutional claims. There was no word on when a new date for lethal injection would be set.

"I'm hopeful this is the last legal chapter in the long history of this case," said Prince William County Commonwealth's Attorney Paul Ebert. "The survivors -- Stacie's mother and [her sister] -- have really been traumatized by delay after delay. Hopefully they're going to get some peace and closure after all these years."

The crime shocked the Washington area. Stacie Reed knew Powell, then 20 and an admitted racist.

Virginia's highest court threw out the verdict in Powell's first trial, saying prosecutors had not proved that other necessary death-eligible offenses were committed against the 16-year-old. Such "aggravating" factors could include rape, attempted rape or robbery in the commission of murder.

The sexual assault and attempted murder of Stacie Reed's younger sister were upheld, and Powell was given a long prison sentence.

Powell, believing he was free from execution, wrote a taunting, profanity-filled letter from behind bars to Ebert, laying out explicit details of the crime unknown to investigators at the time.

The killer also said that after that crime, he waited in the house until the younger girl returned from school, then attacked her, leaving her for dead. In the meantime, he drank iced tea from the family refrigerator and smoked a cigarette, forensic evidence that investigators used to place Powell at the scene of the crime.

With the new firsthand account from Powell, he was indicted again and charged with the murder and attempted rape of Stacie Reed -- making him eligible for capital punishment if convicted. He was again convicted, and federal and state courts upheld the conviction on appeal.