Girl, 7, vanished while looking for a butterfly 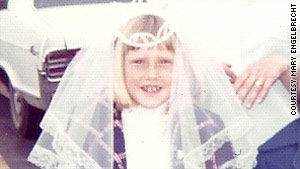 Janice Pockett, 7, vanished in July 1973 while riding her bicycle and looking for a butterfly.

New York (CNN) -- On a July afternoon in 1973, a little girl set out on her bicycle in a pristine corner of Connecticut. Janice Pockett, 7, was looking for a butterfly she'd caught and left on a rock by the road a couple of days earlier.

"We were driving my mom crazy I remember," said her younger sister, Mary Engelbrecht, who is now 43. "My sister and I had been bickering over something stupid -- a toothbrush, I think."

Janice asked if she could ride off by herself and their mother said yes. It was a big deal, Engelbrecht said, because it was the first time either girl had been allowed to go anywhere by herself.

Janice never returned and 37 years later, the mystery of what happened to her continues to trouble residents of Tolland, a quiet community in the semi-rural suburbs of eastern Connecticut.

Engelbrecht still has vivid memories of the day her sister vanished. She recalls that their mother gave Janice an envelope for the butterfly. She remembers how Janice rode off on her green, Murray banana-seat bicycle.

Half an hour went by, and there was no sign of Janice. Engelbrecht, then 6, remembers walking up the street holding her mother's hand as they went looking for her sister.

They found her bike less than a mile away, abandoned on a dirt road close to the woods.

"We found the bike, but my sister was nowhere," Engelbrecht told CNN. "Police later told us they never found her butterfly, or the envelope either." Connecticut State Police continue to work the case. According to Detective Dan Cargill, a member of the investigative team, police found the bicycle between the rock and the Pocketts' home.

We found the bike, but my sister was nowhere.
--Mary Engelbrecht, sister

"It appeared Janice may have been on her way back home when she was snatched," he said.

Police searched on foot and horseback, and used cadaver dogs to search the woods near the dirt road where the child's bike was found.

Over the years police and volunteers have continued searching. They say they've gone over every inch of the woods. No evidence related to Janice Pockett was ever found.

"I know in the initial search they scoured the woods for newly dug holes, but found none," Cargill said.

Janice's bicycle was tested for fingerprints and, more recently, was tested with newer technologies available to investigators. Again, no forensic evidence was found.

Hundreds of potential suspects were questioned; homes in the neighborhood were searched, tips were followed up, and criminal background checks were done. Still, nothing.

"The dirt road where her bike had been found had tire tracks on it from various vehicles and our investigators followed up, searching vehicles fitting those tracks but again no clues were found," Cargill said.

Leads on possible suspects were followed, but investigators were frustrated by the dead ends.

"There were hundreds of names of possible suspects, but many were ruled out," Cargill said. "Some who are still on the list, we simply didn't have corroborating evidence to substantiate them as suspects."

There were hundreds of names of possible suspects, but many were ruled out.
--Dan Cargill, detective
RELATED TOPICS

One potential suspect, now deceased, lived about 20 miles from Tolland at the time Janice Pockett disappeared. His criminal record included prison terms for the abduction and attempted murder of two boys in Massachusetts. And the man later was convicted of molesting two boys in Montana.

When police searched the man's Montana home, they found fragments of a child's bones, but could not match them to Pockett. The man died in prison in 2008, and the identity of the child whose bones were found remains a mystery.

Blond with blue eyes, Janice was 4 feet tall in 1973 and weighed 65 pounds. She was wearing blue shorts with an American flag pattern, a blue and white striped shirt and blue sneakers when she was last seen.

Investigators are asking for the public's help. Anyone who knows the whereabouts of Janice Pockett or can lead police to the individual responsible for her disappearance is asked to call the tip line at 860-896-3200.