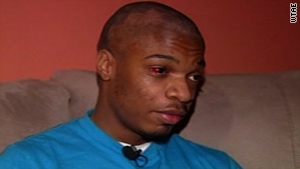 Pittsburgh police acknowledge they used "closed fist strikes" on Jordan Miles, but only to subdue him.

(CNN) -- An arrest in which several punches were thrown has triggered an accusation of brutality against Pittsburgh, Pennsylvania, police from the mother of the 18-year-old honor student who was taken into custody.

Police, in a criminal complaint on the incident, say "closed fist strikes" were used by the undercover police officers, but only to subdue the teenager as he tried to get away.

His mother said she plans to file a civil rights claim against the officers.

Terez Miles said her son, Jordan Miles, who is black, thought his life was in jeopardy when three white men jumped out of a car on the night of January 11 as he walked not far from his home.

"My son tried to run thinking his life was in jeopardy," Terez Miles said. "He made three steps before he slipped and fell." After that, she said, the police used a stun gun and beat him, pulling out a chunk of his hair.

The case is being investigated, [the Pittsburgh mayor is] closely monitoring it. He's met with the chief.
--Joanna Doven, Pittsburgh press secretary
RELATED TOPICS

The criminal complaint says the officers, considering Jordan Miles' appearance suspicious, got out of the car and identified themselves as police. He tried to flee, fell, and then struggled to escape.

The officers "delivered 2-3 closed fist strikes to Miles' head/face with still no effect," and then a "knee strike to Miles' head causing him to momentarily stop resisting," so that he could be handcuffed, the document says.

Miles' mother said the officers did not identify themselves as police to her son, a viola player and student at the city's Creative and Performing Arts High School.

The complaint says the police officers believed Miles was engaged in criminal activity and possibly armed with a "large heavy object." The object turned out to be a bottle of Mountain Dew.

A hearing in the case was scheduled for Thursday, but it was unclear whether the officers involved showed up, said Miles' attorney, Kerry Lewis. The judge postponed the case until February 18.

Pittsburgh Mayor Luke Ravenstahl is "taking this very seriously," said his press secretary, Joanna Doven. "The case is being investigated, he's closely monitoring it. He's met with the chief."

The three officers were taken off plainclothes duty and were back in uniform, she said.

Terez Miles contends the officers used too much force.

"My son is 150 pounds and 5-foot-6. There's no need for this degree of violence and brutality for someone of this stature," she said.