Arkansas recruiting center killing suspect: 'This was a jihadi attack' 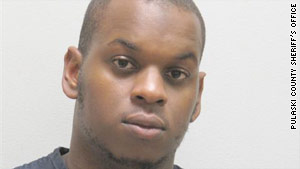 Abdul Hakim Muhammad said he decided to bypass his lawyer with a letter to the judge presiding over his case.
STORY HIGHLIGHTS
RELATED TOPICS

(CNN) -- A Tennessee man -- accused in a fatal attack at a military recruiting center in Arkansas in June -- wants to plead guilty and claims to have ties to al Qaeda in Yemen in a letter he wrote to the judge presiding over his case.

In the handwritten letter dated January 12, Abdul Hakim Muhammad said he did not want a trial and insisted the shooting was "justified" under jihad.

"This was a jihadi attack on infidel forces that didn't go as plan," he wrote. "Flat out truth."

It was not immediately clear whether the judge, Herbert Wright Jr., would accept the plea.

"If my client had the intention of pleading guilty, it is misguided and misinformed as to Arkansas law," Ferguson said from Memphis, Tennessee, on Thursday. "He can't plead guilty to a capital crime."

That response is why Muhammad said he decided to bypass his lawyer with a letter to Wright. He wrote that he believed it was "a lie" that he could not plead guilty.

In June, Muhammad pleaded not guilty to one count of capital murder and 16 counts of engaging in a terrorist act.

He "stated that he was a practicing Muslim ... that he was mad at the U.S. military because of what they had done to Muslims in the past," Detective Tommy Hudson wrote in a police report at the time.

Muhammad told police "he fired several rounds at the soldiers with the intent of killing them," according to Hudson's report.

In his letter to the judge, Muhammad claimed he had links to al Qaeda in the Arabian Peninsula in Yemen, a group that has claimed responsibility for the attempting bombing of a U.S.-bound airliner on Christmas Day.

"My lawyer has no defense," he wrote. "I wasn't insane or post traumatic nor was I forced to do this act. Which I believe and it is justified according to Islamic laws and the Islamic religion jihad -- to fight those who wage war on Islam and Muslims."