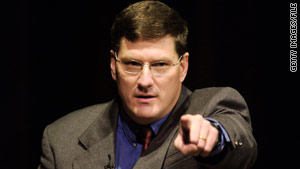 (CNN) -- Pennsylvania authorities say they arrested a former United Nations weapons inspector after he allegedly exchanged sexually explicit online messages with a police officer who was pretending to be a 15-year-old girl.

Ritter's lawyer, Todd Henry, did not immediately respond to CNN's requests for comment about the arrest, which The Pocono Record first reported on Thursday.

According to an affidavit of probable cause, "delmar4fun" contacted Barrett Township Detective Ryan Venneman -- who was posing as "Emily," from Poconos, Pennsylvania -- in an online chat room on February 7, 2009, saying he was a 44-year-old man from Albany, New York.

Ritter, 48, lives in Delmar, New York, according to police. Delmar is in Albany County.

"Delmar4fun," whom police identified as Ritter, sent "Emily" a link to his Web camera and then masturbated on camera and said he was fantasizing about having sex with her, the affidavit said.

However, Ritter allegedly later resent the camera link, and masturbated and ejaculated on camera, the affidavit said.

Venneman called a phone number that "delmar4fun" had given, and told him that "Emily" was a police officer. "Delmar4fun" identified himself to Venneman, the affidavit said.

Ritter was arrested on November 9, 2009, on a number of charges including indecent exposure, corruption of minors and criminal solicitation, according to the police news release.

Ritter is free on $25,000 unsecured bail, according to the Barrett Township Police Department.

Ritter served from 1991 to 1998 as the chief United Nations weapons inspector in Iraq.