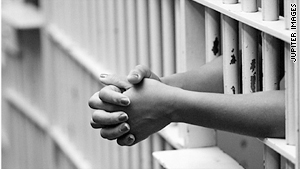 This month, Connecticut raised from 16 to 17 the age for juveniles to be automatically prosecuted in adult court.

The outgoing sophomore who enjoyed playing sports was charged and sentenced as an adult in Connecticut for third-degree assault.

The crime: He and a friend stole a pack of gum from another teen.

Because he entered the adult penal system, the teen's prospects of joining the Marines are dim. His troubles have landed him in an alternative high school.

If Lamourt's son had committed the crime this month, his situation would be different. His record would have been sealed in the juvenile system.

Earlier this month, Connecticut raised from 16 to 17 the age at which a juvenile is automatically prosecuted as an adult. The change comes at a time when the "adult time for adult crime" mentality is being re-examined in several states and challenged in the U.S. Supreme Court.

Connecticut child advocates say the juvenile system is better suited for teens because it offers more access to rehabilitative programs, schooling, community-based programming and supervision from juvenile probation officers. In felony cases, judges can still decide on a case-by-case basis whether to transfer juveniles younger than 17 to the adult system.

"I was devastated that my son would be in corrections with grown men," said Lamourt. Her son spent a month at a adult facility that housed juveniles and young adults.

"He feels like from here on down, everything will go downhill," she said.

Juvenile courts have always had the ability to transfer teens and children to the adult system, but a spike in youth crime during the 1980s and 1990s prompted states to implement mandatory sentencing policies for certain crimes and lower the age at which a child can be sentenced to adult court.

The decision to raise the age of adult court jurisdiction in Connecticut was spurred by the 2005 suicide of David Burgos. Burgos, a lanky 17-year-old known to family for his sense of humor, suffered from mental illness when he was charged and sentenced as an adult for violating probation.

Burgo hung himself with a sheet in his cell at Manson Youth Institution, a corrections facility that also houses offenders between 18 and 21. His suicide galvanized Connecticut lawmakers to raise the age in which a juvenile can be moved into adult corrections system.

"When you teach someone to swim, you don't just throw them in the deep end and hope they do great," said Abby Anderson, executive director of the Connecticut Juvenile Justice Alliance, the nonprofit agency that spearheaded the campaign to change the law.

When you teach someone to swim, you don't just throw them in the deep end and hope they do great.
--Abby Anderson, executive director, Connecticut Juvenile Justice Alliance

Originally, Connecticut child advocates pushed legislation that raised the age to 18, but budget cuts forced the state to raise the age to 17.

The policy shift in Connecticut, a state that once sent the highest number of juveniles to the adult system, is catching on in other states. This month, Illinois stopped sending 17-year-olds who commit misdemeanors to the adult system. Instead, the offenders are sent to the juvenile system where drug treatment and counseling are often required.

In North Carolina, another state where the criminal justice system automatically views 16-year-olds as adults, a bill was introduced last spring to raise the age a teen can be charged as an adult to 18. That measure in the bill was rejected, but lawmakers established a task force to study the proposal with a deadline of 2011.

Meanwhile, lobbying efforts to raise the age continue in other states. In Georgia and Wisconsin, where a 17-year-old is considered an adult, lawmakers and juvenile advocates have been working toward change for the past year.

A precise number of how many children are tried in adult court is difficult to ascertain because states keep records differently, but some experts estimate about a quarter of juveniles are prosecuted in the adult court system.

The juvenile system is based on a rehabilitative approach, compared to the punitive adult system, child advocates point out. They argue that the adult system teaches juveniles to become adult criminals, which places the community at risk.

While some states are questioning their juvenile sentencing policies, sentencing experts say raising the ages or eliminating mandatory sentences remains politically risky. Much of what states decide to do with their juvenile policies may depend upon Connecticut's outcome.

Jeffrey Fagan, a Columbia University law professor who has studied juvenile crime, said he thinks reform will come in stages, such as Illinois' new law, which addresses juveniles committing misdemeanors but not other crimes.

The teenage brain is like a car with a good accelerator but a weak brake.
--Professor Laurence Steinberg, Temple University

"It's easier to sell to the public and implement," Fagan said.

Up until the last decade, scientific research on the adolescent brain was largely nonexistent. Led by professor Laurence Steinberg of Temple University and others in the psychology field, their research explained why juveniles lack control and understanding of long-term consequence and are more susceptible to peer pressure.

"The teenage brain is like a car with a good accelerator but a weak brake," Steinberg wrote. "With powerful impulses under poor control, the likely result is a crash."

Critics argue that sending juveniles to the adult system can deter other teens. They point out that juvenile crime has declined in recent years.

Maydellyn Lamourt says she warned her son about the dangers of a life of crime, citing mistakes she had made. Lamourt spent eight months in prison after being convicted of larceny and drug possession in 2004.

Like her son, the mother knows firsthand the consequences of having a criminal record.

"It follows you for life," she said.