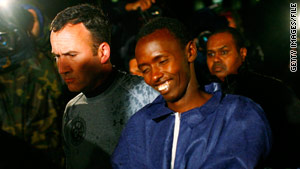 New York (CNN) -- A Somali suspect in the hijacking of the U.S.-flagged Maersk Alabama in the Indian Ocean last April has been charged with involvement in two additional hijackings, authorities said Tuesday.

One of the hijacked vessels is still being held hostage, federal prosecutors said in announcing a 10-count indictment filed against Abduwali Abdukhadir Muse. The vessels are identified in court documents as "Ship-1" and "Ship-2."

Under the indictment, Muse faces charges including piracy; seizing a ship by force; kidnapping and hostage taking, along with charges of possessing a machine gun in the commission of other offenses. If convicted, he faces a maximum penalty of life in prison. He was to be arraigned on the additional charges Tuesday afternoon in federal court, authorities said.

Muse is accused of participating in the two hijackings before the Maersk Alabama was hijacked April 8, prosecutors said in a statement.

Ship-1 was seized by pirates in March in the Indian Ocean, according to the indictment and a criminal complaint. Authorities say Muse and others "known and unknown" boarded the vessel while armed with guns, threatened its captain and took control, holding the ship's captain and crew hostage.

While on the ship, prosecutors said, Muse aimed a gun at one of the hostages and threatened to kill him. He also showed a hostage what appeared to be an improvised explosive device, the statement said. "Muse placed the IED in the vicinity of the hostage, and indicated that if the authorities came the IED would explode and the hostage would be killed."

Modern-day pirates who wreak havoc off faraway coasts will be met with modern-day justice in the United States.
--Preet Bharara, U.S. attorney for the Southern District of New York
RELATED TOPICS

In April, Muse and the others left Ship-1 on a small boat, called "the skiff," prosecutors said. When the skiff returned, the ship and the skiff "were made to rendezvous" with another ship, Ship-2.

The captain and crew of Ship-2 are still being held hostage, according to the documents. The indictment does not say what happened to Ship-1, its captain or crew.

The Maersk Alabama was attacked about 350 miles off the Somali coast, authorities have previously said. Muse allegedly demanded that the ship be stopped, then he and others allegedly took a life boat and held the captain of the ship -- Capt. Richard Phillips -- hostage on it.

The USS Bainbridge came to the assistance of the vessel, and in radio communications, Muse and the others threatened to kill Phillips if they were not guaranteed safe passage away from the scene, authorities have said.

On April 12, Muse boarded the Bainbridge and demanded safe passage for himself and the others in exchange for Phillips' release, according to a criminal complaint. While he was away from the lifeboat, Navy SEALs shot and killed the three remaining pirates, authorities said. Muse was taken into custody.

"Piracy on the high seas is a threat against the community of nations," Preet Bharara, U.S. attorney for the Southern District of New York, said in the statement Tuesday. "Today's indictment alleges criminal conduct that extends beyond the attack against the captain and crew of the American-flagged Maersk Alabama. Modern-day pirates who wreak havoc off faraway coasts will be met with modern-day justice in the United States."

The investigation is continuing, Bharara said.

A federal judge ruled in April that Muse could be tried as an adult. His father in Somalia told defense attorneys he was born November 20, 1993, meaning he would have been 15 at the time of the hijackings. However, the prosecution argued otherwise, saying Muse made statements suggesting he was older.