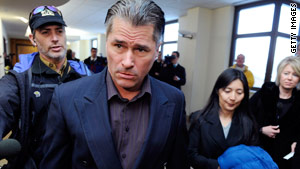 (CNN) -- A man who pleaded guilty to perpetrating a hoax by saying his 6-year-old son was drifting over Colorado in a balloon began his jail sentence Monday.

Heene pleaded guilty in November to a felony count of attempting to influence a public servant.

Prosecutors said he and his wife staged their son's disappearance to generate publicity for themselves because they wanted to star in a reality television show.

A judge sentenced Heene to spend 90 days in custody. He will spend 30 days and nights in jail but is eligible for work release during the last 60 days of his sentence, said Linda Jensen, a spokeswoman for the district attorney.

If he has a job during that time, he would get out of jail during the day and return to spend the night, she said.

He also must serve four years on probation and complete 100 hours of community service each year.

Heene told authorities in October that his son, Falcon, was drifting over eastern Colorado in a homemade balloon that had come loose from its moorings in the family's backyard. Authorities raced to track the balloon while puzzling over ways to rescue the boy inside.

"This has gotten more media attention than any other case we've ever had here," Jensen said.

"You guys said we did this for the show," Falcon said in the interview after his father asked him why he had not come out from hiding when he heard his parents calling for him. Later in the interview the Heenes said their son was simply confused.

Authorities said Heene's wife, Mayumi, later admitted the whole thing was a hoax and that Falcon was safe in their home the whole time.

She pleaded guilty to a misdemeanor charge of false reporting to authorities. She was sentenced to 20 days in jail, but her term will begin after her husband's sentence ends so their children will have a parent able to care for them.

Richard Heene recently maintained on CNN's "Larry King Live" that the incident was not part of a plan for fame.

"The evidence against Mr. Heene and Mayumi at this point is really overwhelming," the sheriff said.

"There is no doubt in my mind that this thing was a hoax, and I really doubt that there's very few people in America who don't understand at this point that this was an elaborate hoax perpetrated by Richard and Mayumi."