Witness: Civil unions like allowing just one bite of Twinkie 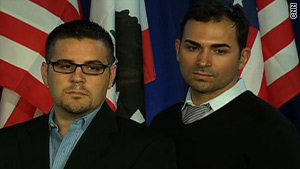 Jeffrey Zarrillo, left, and Paul Katami, who have been together for nine years, testified in the federal case.
STORY HIGHLIGHTS
RELATED TOPICS

San Francisco, California (CNN) -- A gay couple challenging Proposition 8 in federal court Monday said civil unions and domestic partnerships aren't the same as marriages, something they view as a stepping stone toward starting a family.

"[It's] like putting a Twinkie at the end of a treadmill and saying, 'You can only have a bite,' " testified Paul Katami, one of the plaintiffs. "And you want the whole thing. ... All I want is to be married."

Katami and his partner, Jeffrey Zarrillo, are among plaintiffs asking Chief Judge Vaughn R. Walker of the U.S. District Court in San Francisco to issue an injunction against the enforcement of California's Proposition 8, arguing the ban on same-sex marriage is unconstitutional.

If allowed to marry his partner, 36-year-old Zarrillo said he would finally feel equal and complete.

"I'd be able to stand there as one family, as a married individual," Zarrillo said, noting the "pride that one feels when that happens."

"Domestic partnership would relegate me to second-class citizenship, maybe third-class -- and that's not enough," he said.

Zarrillo and Katami of Los Angeles, California, are joined by Kristin Perry and Sandra Stier of Berkeley, California, in the court challenge.

Zarrillo said he believes it's an important step to be married before having children, saying it would make it easier for the couple and the child and would afford the child additional protections.

Being married and wearing a wedding ring sends a message to society, he said.

"It says to them, these individuals are serious," Zarrillo said. "They're committed to one another."

Another attorney for the couples, Theodore Olson, argued to the judge that a ban on Proposition 8 leaves gay couples out of something available to all other people in the United States.

"Marriage is central to life in America," Olson said. "It promotes mental, physical and emotional self. It's the building block of family, neighborhoods and community in our society."

Proposition 8, Olson said, ended the dream of marriage for same-sex couples, which includes hundreds of thousands of Californians. The state, he said, "has put people into categories."

"You're different, and we're going to take away that right from you," Olson said, interpreting the meaning of the ban. "... That's discrimination."

However, Charles Cooper, an attorney representing Protect Marriage, the group that came up with Proposition 8, told the judge in his opening statement the purpose of marriage is to promote procreation between men and women.

Same-sex marriage "will likely lead to very real social harm; it's too novel and experimental," he argued.

Californians "are entitled to make this critical decision for themselves," he said, pointing to voter support of the proposition.

Except for the issue of marriage, gays and lesbians have been successful in attaining policy goals, Cooper said, adding that California has some of the most comprehensive protections in the nation.

About 100 protesters against the measure and in favor of same-sex marriage gathered peacefully outside the courthouse before the hearing, waving signs supporting equal rights.

The case will likely head to the U.S. Supreme Court no matter the outcome. It is expected to set legal precedents that will shape society for years and result in a landmark court decision that settles whether Americans can marry people of the same sex.

In legal circles and across the Internet, it has been dubbed this generation's Brown v. Board of Education, the case that led to the Supreme Court decision that outlawed segregation in schools. Some say it could be the biggest ruling since Roe v. Wade, which tackled abortion. It also closely echoes the Supreme Court case that overturned bans on interracial marriage.

CNN's Mallory Simon and Bill Mears contributed to this report.