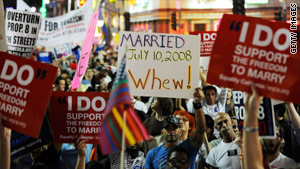 (CNN) -- A California judge ruled Wednesday to allow cameras in a federal courtroom to document a challenge to Proposition 8, a measure banning same-sex marriage.

The courtroom footage will not be streamed live, but will be uploaded on the Web site YouTube daily, CNN affiliate KGO reported.

Proposition 8 passed with about 52.5 percent of the vote in November 2008. A lesbian couple and a gay couple who were banned from marrying filed a suit challenging the constitutionality of the new measure, the affiliate reported.

The nonjury trial is to begin on January 11 in federal court in San Francisco.

The rare decision to allow cameras in a federal courtroom was influenced by intense media attention, court officials said.

The legal battle over Proposition 8 has prompted passionate debate and in the past has spurred protests outside courtrooms.

Opponents of the ban say it improperly altered the state's Constitution to restrict a fundamental right guaranteed in the state charter.

Ban supporters say Californians long have had the right to change their state Constitution through ballot initiatives.