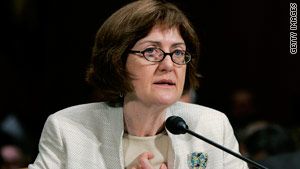 Washington (CNN) -- The number of threats against federal judges and prosecutors more than doubled over the past six years, according to a report released Monday by the U.S. Department of Justice.

During that six-year period, 5,744 threats were directed at those federal officials, the report says.

The report concludes that the U.S. Marshals Service's program for protecting judges and prosecutors is hampered by a number of deficiencies.

"We believe the [Justice] Department must promptly address these deficiencies to ensure the safety of federal judges, U.S. attorneys ... and other federal court officials," said Justice Department Inspector General Glenn Fine, who released the report.

The Marshals Service, which is overseen by the Justice Department, bears primary responsibility for protecting more than 2,000 federal judges and roughly 5,250 other federal judicial officials. The service had a $344 million judicial protection budget in fiscal year 2008.

Among other things, the report says threats made against federal judges and attorneys are not "consistently and promptly reported." As many as 25 percent of all threats made during the period covered by the report were not passed on to the Marshals Service, the report states.

Even when threats are reported, the Marshals Service "does not consistently provide an appropriate response for the risk level posed by the threat," the report says. The Marshals Service fails to "fully or effectively coordinate with other law enforcement agencies to respond to threats against federal judicial officials."

Federal regulations require the Marshals Service to notify the FBI when it discovers a threat against a protectee. The report says, however, that 40 percent of the 1,587 threats reported in fiscal years 2007 and 2008 "contained no information regarding FBI notification."

The report lists 14 recommendations to improve protection, including a call for the Marshals Service to "clearly explain to protectees the detrimental effect that delays or the failure to report has on the security provided."

It also calls for a series of new "internal controls" within the Marshals Service to ensure that the agency's threat database "contains full and accurate information."

The Marshals Service and the Executive Office for United States Attorneys have said they are taking steps to implement the report's recommendations.

No federal judges or assistant U.S. attorneys were killed or seriously injured in the period covered, according to the report. However, public attention became more focused on the problem of judicial security after the murder of the mother and husband of U.S. District Judge Joan Lefkow in Chicago, Illinois, in February 2005.

In May 2008, multiple pipe bombs were detonated outside a federal courthouse in San Diego, California.

The report included several examples of threats made against federal judges and prosecutors.