Kahn, the architect of airline deregulation, dies at 93 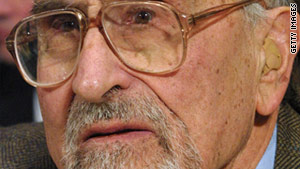 (CNN) -- Alfred Kahn, an economist who became known as the "architect of deregulation" under the Carter administration, has died of cancer. He was 93.

It is widely accepted that Kahn's efforts dismantled air travel as the domain of the elite and paved the way for low-cost airlines.

He died at his home in Ithaca, New York, on Monday, according to a statement from Cornell University where he was a professor emeritus of political economy.

Kahn spearheaded the U.S. Airline Deregulation Act of 1978 when he chaired the now-defunct Civil Aeronautics Board.

At the time, a coast-to-coast ticket cost an exorbitant sum of money and no new airlines were taking flight.

Airlines such as Pan Am, Eastern and Braniff ruled the skies, and the aeronautics board governed them, controlling routes and ticket prices, keeping fares high and eliminating competition.

"Nobody could fly an airplane commercially on any route without specific permission from the Civil Aeronautics Board, and price competition, cutting prices, was illegal," Kahn told CNN in 1998, recalling that period.

He wanted change that would allow competition and let prices be set by the marketplace rather than the government.

The result of his work was the Airline Deregulation Act of 1978, signed into law by then-President Jimmy Carter, who predicted it would reduce airfares by up to 50 percent and open up air travel to millions of Americans who previously couldn't afford it.

The Department of Transportation became the industry watchdog, and airlines took control of themselves.

Deregulation gave birth to the concepts of airport hubs and frequent flyer miles and led to the creation of new airlines.

"His vision and actions resulted in a profound transformation of the U.S. airline industry and strongly influenced international air transportation," the publishers of Aviation Week and Space Technology said when they named him the winner of the 1997 Welch Pogue Award, which recognizes contributions to aviation.

When he chaired the aviation board, Kahn was also remembered for his campaign to eliminate "'bureaucratese' or gobbledygook" at the agency, said colleague Robert Frank, a professor of management at Cornell's Johnson School.

"If you can't explain what you're doing in plain English, you're probably doing something wrong," Kahn once told the board's staff.

After his term at the aeronautics board, Carter tapped him to serve as his advisor on inflation.

When the administration admonished him for alarming the public that the country could face a "deep, deep depression" if Carter's anti-inflation policies failed, Kahn began using the euphemism "banana" for the word "depression," Cornell university said in a statement.

He is survived by his wife, Mary; three children; a nephew for whom he and Mary were legal guardians; eight grandchildren and two great-grandchildren, the university said.