Bank of America rejects conjecture that it is WikiLeaks' next target 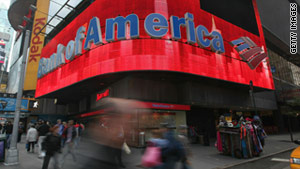 A Bank of America spokesman has dismissed speculation that the bank is the focus of the next WikiLeaks release.
STORY HIGHLIGHTS

(CNN) -- Bank of America tersely dismissed speculation Tuesday that it is the "big U.S. bank" that WikiLeaks founder Julian Assange told Forbes magazine will be the website's next target.

The left-leaning website Huffington Post published that conjecture, citing an October 2009 interview with Computer World magazine in which Assange said he had "5GB from Bank of America, one of the executive's hard drives." But bank spokesman Scott Silvestri said there was no more proof of that now than there was 14 months earlier.

"More than a year ago WikiLeaks claimed to have the computer hard drive of a Bank of America executive," Silvestri said.

"Aside from the claims themselves, we have no evidence that supports this assertion. We are unaware of any new claims by WikiLeaks that pertain specifically to Bank of America."

Assange teased Forbes in the interview published Monday, saying the information he was preparing to release "could take down a bank or two."

"You could call it the ecosystem of corruption," he said. "But it's also all the regular decision making that turns a blind eye to and supports unethical practices: the oversight that's not done, the priorities of executives, how they think they're fulfilling their own self-interest."

Asked what he hoped would be accomplished by the leak, Assange told Forbes that "it will give a true and representative insight into how banks behave at the executive level in a way that will stimulate investigations and reforms, I presume."

Wall Street watchers, however, wondered just how damaging any material could be to one of the big banks, given that many are already plagued by scandal.

"We already know the banks are grossly incompetent, can't manage risk and would be dead without taxpayer support," Barry Ritholtz, a Wall Street money manager who rails on the bankers at his Big Picture blog, told Fortune magazine. "What are we going to find in these leaks -- that free checking isn't really free?"

"Anyone who follows the banking industry knows these guys are essentially insolvent," said Ritholtz. "So we're not going to get surprised there."

Forbes reporter Andrew Greenberg, who conducted the interview with Assange, noted in his blog Tuesday that there likely isn't much material about Bank of America that isn't already known.

"As much as any bank on Wall Street, BoA has been scrutinized in recent years by everyone from plaintiffs' attorneys in class-action investor suits to the New York Attorney General's office," he wrote, adding that Assange told him "he had unpublished, potentially damaging documents on multiple finance firms, beyond the bank 'megaleak' that we discussed."