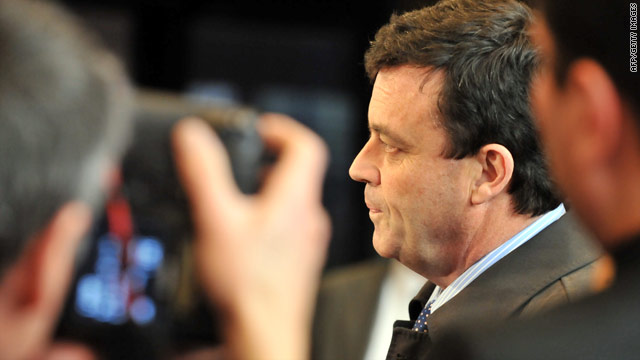 (CNN) -- As Europe and the International Monetary Fund hammer out the the final details of an Irish rescue package worth tens of billions, the British government Monday offered a direct loan to Ireland worth $11.3 billion (£7 billion).

The British Finance Minister George Osborne said the offer of the loan was in Britain's national interest and that Ireland was a "friend in need."

Osborne said that in addition to the offer, Britain would also be contributing to an international rescue package, adding that details of the British, IMF and Eurozone packages were still being worked out.

"Ireland is our very closest economic neighbor so I judged it to be in our national interest to be part of the international efforts to help the Irish," Osborne told the BBC.

Asked if the British commitment totaled $11.3 billion, Mr Osborne said: "It's around that, it's in the billions not the tens of billions."

What does the bailout mean?

Ireland needs funds to shore up its struggling banking sector and buttress the government, which has poured billions into saving the banks.

Fears about Ireland have pushed down the value of the euro against the dollar and put stock markets under pressure.

But the request for help is unpopular in Ireland, and the government could be punished Thursday when there is an election to fill an empty seat in parliament.

A small crowd of protesters demonstrated Sunday night, as government ministers left the press conference where the aid request was announced. One person was arrested earlier in the day for public order offenses at a demonstration outside government offices, police said.

But European Union finance ministers welcomed Ireland's request for assistance, according to a joint statement issued soon after Cowen's announcement.

The ministers agreed earlier on Sunday to take on the request and start negotiations, Irish Finance Minister Brian Lenihan said.

"Ministers concur with the [European] Commission and the European Central Bank that providing assistance to Ireland is warranted to safeguard financial ability in the EU and in the euro area," the EU statement said.

The central bank's governing council likewise embraced the request, saying in a statement that a loan deal "will contribute to ensuring the stability of the Irish banking system and permit it to perform its role in the functioning of the economy."

The IMF Managing Director Dominique Strauss-Kahn said, in a news release, that the international finance institution "stands ready to join this effort, including through a multi-year loan."

Cowen said that the government planned to cut 6 billion euros before it wraps its current budgetary cycle on December 7 and planned to eliminate a total of 15 billion euros over the next four years.

"These targets already have the support of European [financial] ministers," the prime minister said. "These [cuts] will be difficult for everyone."

Ireland shares the euro with 15 other European nations, and its perilous financial situations has raised concerns about a trickle-down effect on the common currency and the wider European Union. Responding to questions that a large outside loan might threaten Ireland's sovereignty, Cowen said Ireland's economy was already tightly tied into Europe's and said "support ... from our partners" encouraged him to support asking for their assistance.

"Our membership in the EU has transformed our country for the better," the prime minister said. "[But] the task of rebuilding our economy falls to our own ... people."