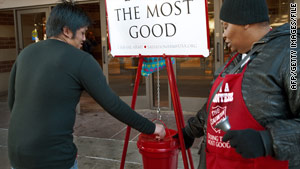 The Salvation Army was among the top charities reporting declines in donations, the Chronicle of Philanthropy says.
STORY HIGHLIGHTS
RELATED TOPICS

Editor's Note: Join the CNN iReport #beahero challenge, and donate to your cause of choice today. Learn more here.

(CNN) -- Donations to the country's 400 biggest charities plunged last year by 11 percent, the worst decline since the Chronicle of Philanthropy started ranking the fundraising organizations two decades ago.

The Chronicle's Philanthropy 400 rankings show six of the top 10 charities reported declines in donations, including the United Way Worldwide and the Salvation Army.

"Food for the Poor (No. 6) saw contributions fall by more than 27 percent, while donations to the Fidelity Charitable Gift Fund (No. 7) plunged by 40.3 percent, largely because it relies heavily on stock gifts, which were not very popular last year," a report from the Chronicle states.

But some charities enjoyed stronger donations. Catholic Charities USA had a 66 percent increase in donations, and the AmeriCares Foundation saw an 18.1 percent rise in giving, mostly in food, medicine, and other donated goods, according to the Chronicle. Feed the Children and Habitat for Humanity also grew by more than $1 billion.

The Philanthropy 400 list ranks charities that raise the most from private sources, The Chronicle said. Government funds are not counted.