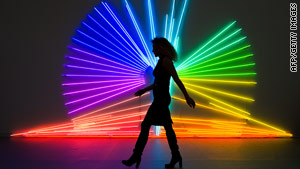 (CNN) -- At seven o'clock on the opening day of London's premier contemporary art fair, Frieze, there was a scrum for champagne. People were celebrating.

After a gloomy couple of years in the art market, the dealers were smiling and relaxed at their stalls.

However, with around £235 million of art spread across 173 exhibitors, the question is: will it sell?

"Usually I'm quite conservative," said Rachel Lehmann from New York gallery Lehmann Maupin, which represents the work of British artist Tracey Emin and German photographer Juergen Teller among others. "I always say that you judge a fair by the second day rather than the first day, when you have all the quick buys and the depth of the market is not really shown yet," she continued.

"However, I have to say that we have been doing well -- and there were buyers from everywhere, all over the world, from Jordan to Korea to Britain," she said.

Now in its eighth year, the Frieze art fair -- one of the foremost global contemporary art fairs and a good barometer of the state of the market -- has had its share of highs and lows.

From 2005 until 2007, it enjoyed an intense spending period. The economic downturn ushered in a more sober period for galleries unable to match the sales of the boom times.

Though celebrities including supermodel Claudia Schiffer and British socialite Tamara Beckwith were spotted making their way around this year's fair, it is art collectors and international museums that the exhibitors wish to court.

"We've had a really good day," said Philomene Magers, of Berlin and London-based gallery Spruth Magers, which represents the work of American photographer Cindy Sherman and others.

"We had a lot of really serious collectors," she continued. "It's less of a social thing, but rather a real art thing with very interested buyers."

Sales at premier blue-chip gallery, Hauser & Wirth included $375,000 for a drawing and collage by American artist Paul McCarthy to a European collector, and a painting by Dutch artist Michael Raedecker for $65,000 to a South American collector.

The emergence of Latin America as a force to be reckoned with, both in terms of buying power but also the quality of art produced from the region, has been a talking point at the fair.

Seven Latin American galleries have set up camp, including Brazilian gallery Fortes Vilaca, which is exhibiting a large-scale installation by Cuban art collective Los Carpinteros (the carpenters), valued at 125,000 euros ($176,000).

Humphries said he had seen fewer local collectors this year. He put this down to British clients feeling less urgency about purchasing on the first day of Frieze. "We've seen boom, we've seen bust, we're seeing another mini-boom and I think people think they can take their time," he told CNN.

Matching the cautious Brits, Rachel Lehmann told CNN she had seen fewer Americans than usual making the rounds, a fact that may be linked to the weakened dollar.

The big sale of the day came courtesy of British artist Damien Hirst. A three-paneled vitrine containing fishes in formaldehyde entitled, "The True Artist Helps the World by Revealing Mystic Truths," 2006, was sold for £3.5 million by London gallery White Cube to an Asian buyer.

Two years ago, Hirst staged an unprecedented auction of his work at Sotheby's auction house in London, chalking up £111 million in sales -- at the same time that global investment bank Lehman Brothers went bankrupt.

At a sale of the bank's art collection at Sotheby's New York in September this year, a cabinet by Hirst failed to reach its lower estimate, suggesting that the recession had taken its toll on the artist's prices. Yesterday's sale in London, however, shows there is a continued appetite for the work of Britain's enfant terrible.

If Hirst's work is indicative of the market as a whole, that could show that the blue skies are back.