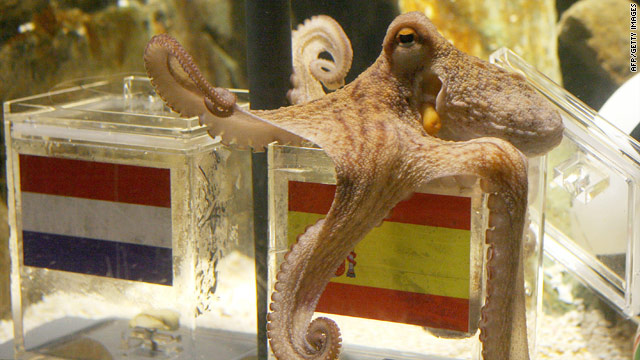 London, England (CNN) -- Before the World Cup started, few could have foretold that one of the biggest winners of the tournament would be a psychic octopus. But now Paul, who correctly predicted the outcome of eight matches in a row, is on course to be the world's first millionaire octopus.

The mystic mollusc is retiring from the prediction business while he's ahead, his owner Sea Life announced on Tuesday. But as the company considers offers to "spread Paul's fame even further, without involving the canny cephalopod directly" marketing experts say it could earn millions by selling his image for advertising products and services.

PR guru Max Clifford, best known for generating tabloid headlines such as "Freddie Starr ate my hamster," believes Paul, who was born in England, has ended his soothsaying days at exactly the right time. "Obviously his 100 percent record is remarkable but the minute he gets it wrong it all disappears," Clifford told CNN.

Now Paul could star in light-hearted commercials. "If you get it right, and remember Paul has had worldwide success ... you're talking about an earning potential of £2 or £3 million (up to $4.5 million), maybe more. It's got to bring a smile to everybody's face. You've got the world's first multimillion-pound octopus here.

"This story is just incredible -- an octopus correctly predicts eight World Cup games -- but you've got to act quickly.

"He could be used in TV endorsements and adverts: 'We're the best in the world. How do we know? Because Paul says so.'"

The adverts must not be too serious though, and would need to be related to his area of expertise, Clifford added. "'If you think I was good on football, when it comes to fish I've got no competition.' So if you had a worldwide chain of fish restaurants, the equivalent of McDonald's, you'd use Paul to launch it.

Another expert agreed, saying there was no limit to the ways in which Paul could be marketed. "Obviously he has a short shelf life but there are many options," said Allyson Stewart-Allen, director of London-based International Marketing Partners.

"A good use for him would be in adverts featuring two competing brands, such as Coke or Pepsi. Which does Paul prefer?" said Stewart-Allen.

"The gaming industry would be the logical use for Paul, or marketing a service that compares the market. Or he could just be an icon, marketing a company like Octopus Travel, for instance.

"I think it would be too frivolous to advertise financial services, but you could licence Paul for children's toys. He could be an icon for a brand, an image for cartoons or video games," she added.

But one thing is certain though: at the age of two and a half -- just six months away from the life expectancy of his species -- Paul's moment in the spotlight will be brief.