Dollar should be replaced as international standard, U.N. report says

By Gabriella Casanas and Mick B. Krever, CNN 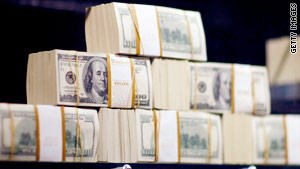 Under proposed system, countries would not have to buy up foreign currencies, as China has done with U.S. dollar.
STORY HIGHLIGHTS
RELATED TOPICS

New York (CNN) -- The dollar is an unreliable international currency and should be replaced by a more stable system, the United Nations Department of Economic and Social Affairs said in a report released Tuesday.

The use of the dollar for international trade came under increasing scrutiny when the U.S. economy fell into recession. "The dollar has proved not to be a stable store of value, which is a requisite for a stable reserve currency," the report said.

Many countries, in Asia in particular, have been building up massive dollar reserves. As a result, those countries' currencies have become undervalued, decreasing their ability to import goods from abroad.

The World Economic and Social Survey 2010 is supporting a proposal long advocated by the International Monetary Fund to create a standardized international system for liquidity transfer.

Under this proposed system, countries would no longer have to buy up foreign currencies, as China has long done with the U.S. dollar. Rather, they would accumulate the right to claim foreign currencies, or special drawing rights, or SDRs, rather than the currencies themselves.

These initiatives, supported by U.N. Secretary-general Ban Ki-moon, are meant to help sustain the international trade and financial systems that will allow less-developed countries to participate and integrate into the global economy.

In addition to the proposed reforms regarding international currency, the survey also offered guidance on increasing social well-being.

The survey said that "the number of the poor in the world living on less than $1.25 a day decreased from 1.8 billion in 1990 to 1.4 billion in 2005, but nearly all of this reduction was concentrated in China."

The number of poor increased in sub-Saharan Africa and South Asia over the same period. Income inequalities within countries have increased since the early 1980s with few exceptions, the report said.

"There's too little aid being provided, it's too fragmented, and it's too volatile in terms of the resources that are flowing to countries," said Rob Vos, director of the development policy and analysis division of the U.N.

The survey projects that by 2050 the population will be at 9 billion, with 85 percent living in developing countries, and the global economy will have to sustain a system that will allow for "decent living."

By 2050, one of every four people living in a developed country and one in every seven in countries now being developed will be over age 65. The fast ageing of the population will call for proper pension and health care systems that are sustainable.