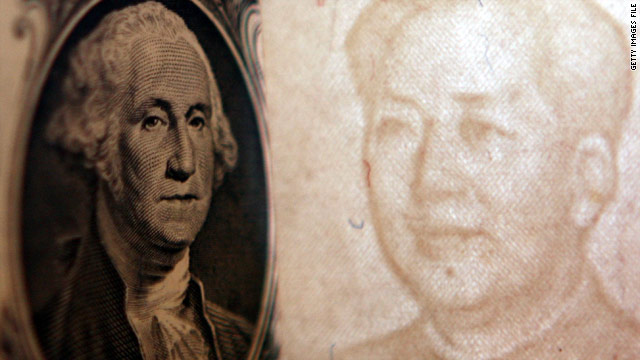 China's move to allow its currency to appreciate against the dollar again after a two-year hiatus has been greeted with approval from Washington and Asia markets.
STORY HIGHLIGHTS

Hong Kong, China (CNN) -- Markets in Asia moved up on news that China would eliminate its peg to the U.S. dollar, an issue that has ratcheted tensions between Washington and Beijing.

As of Monday morning, China's central bank had not moved the currency price nor clarified how much it would allow the value of the yuan to move up or down.

Still, the markets reaction to Saturday's announcement that the move would come was positive. Japan's Nikkei 225 stock rose 1.77 percent and South Korea's Kospi rose 1.5 percent in early trading, and Australia's S&P/ASX 200 was up 1.4 percent by noon Sydney time. Hong Kong's Hang Seng index was up 2.14 percent.

The value of currencies that are perceived to benefit from the yuan move -- the euro, New Zealand and Australian dollars -- were trading higher in Asia Monday. The Euro was up to $1.24 -- about a half-cent higher than its Friday close in New York. The Australian dollar was up one-cent to $0.88 and the New Zealand dollar rose a half-cent to just under $0.71.

The move marks a return to Beijing's policy of limited flexibility in the value of its currency which began in 2005 but was halted in 2008 in the wake of the financial crisis, which damaged the export-driven businesses in China.

Beijing will return to a narrow band of appreciation or depreciation a day depending on market sentiment. In the nearly three years China allowed its currency to gradually change value, the yuan appreciated about 20 percent against the dollar.

The yuan has been locked into trading at 6.83RMB to the dollar since July 2008. At that time, China allowed a one-time 2.1 percent increase to the value of its currency, then allowed it to change in value by no more than 0.5 percent a day.

Patrick Mulloy, a member of the U.S.-China Economic and Security Review Commission, told CNN that the move to float the yuan will need to move fast to catch up with its actual value disparity to the dollar.

While the yuan appreciated by 20 percent from 2005 to 2008 "the currency is presently, most international economists are saying, 35 to 40 percent undervalued," Mulloy said. "Are we going to wait years and years for this currency to appreciate in value? If that's their plan, I don't think that's going to sell (in the U.S.)"

The People's Bank of China -- China's central bank -- announced Saturday it would push further its rate reform to make the yuan, also known as the renminbi, more flexible. The move could appease international criticism against China's weak exchange rate, which has created trade imbalances between Western nations and China.

"The decision was made in view of the recent economic situation and financial market developments at home and abroad, and the balance of payments (BOP) situation in China," Xinhua quoted the Central Bank's spokesperson.

"The stability of the RMB (renminbi) exchange rate has played an important role in mitigating the crisis' impact, contributing significantly to Asian and global recovery, and demonstrating China's efforts in promoting global rebalancing," he said.

President Barack Obama welcomed Saturday's news that China's central bank will allow its national currency to float ahead of the G-20 summit in Toronto, Canada, next week.

"China's decision to increase the flexibility ... is a constructive step that can help safeguard the recovery and contribute to a more balanced global economy," the U.S. president said in the statement on Saturday.

"I look forward to discussing these and other issues at the G-20 Summit in Toronto next weekend," he said.

The International Monetary Fund's managing director, Dominique Strauss-Kahn, released a statement on China's move, which he described as a "welcome development."

"A stronger renminbi is in line with findings of the G-20 Mutual Assessment Process, to be presented in Toronto next week, and will help increase Chinese household income and provide the incentives necessary to reorient investment toward industries that serve the Chinese consumer," he said.

China's move comes ahead of the Group of 20 and the Group of 8 meetings in Canada's Province of Ontario scheduled next week, with finance ministers and central bank governors of major trading powers will discuss trade issues and the world financial crisis.

Representatives of several industrialized nations including India, Brazil, the United States and European countries have previously asked China to allow its currency to float.