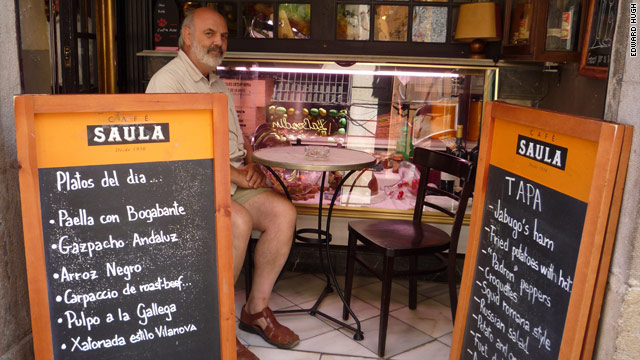 Edward Hugh sits in a cafe near his home in Spain where the British expat has been living since 1990.
STORY HIGHLIGHTS

London, England (CNN) -- A blogger who left Britain 20 years ago for rural bliss in Spain has become an unlikely economic sage whose advice has been sought by the International Monetary Fund.

Hugh attended the London School of Economics in the late 1960s but says he "wasn't learning a lot" and his interest in the subject waned until Japan's economic woes captured his attention, decades later.

Now 61 and living in one of Europe's struggling economies, Spain, Hugh's thoughts on the region's economic problems are attracting attention worldwide.

An appearance on regional television in Catalonia last October led to a call from the IMF in March.

A spokesman for the IMF said Hugh had no "official or unofficial role" with the organization and said it casts a "wide net" in terms of collecting information, adding it appreciated his input over coffee in Spain.

There's no future for any country that is in the sort of mess that these countries are in.
--Blogger Edward Hugh
RELATED TOPICS

By May, Hugh was speaking at the Círculo de Economía, a respected annual meeting of business minds in Barcelona. And just this week a profile in the New York Times pushed his Facebook page to the limit of 5,000 friends. Around 1,000 people tried to "add him" as a friend in one day.

"I use Facebook as an online community. And I use it as a kind of blog which has automatically 5,000 readers which is O.K.," he said.

As followers of his blog would know, Hugh advocates a radical approach to solving the problems of eurozone members burdened by staggering debt levels while being tied to the single euro currency.

From his vantage point in Spain, he has seen fierce resistance to the government's attempts to cut public sector wages. A strike this week was seen as a dress rehearsal for a wider general strike ahead.

"Just talking about it -- Spain reducing civil servants salaries by five percent -- is causing all fury to be unleashed. I don't think they are going to do it. So I put forward this idea is that maybe the simplest and quickest solution is for Germany to go back to the mark," he said.

Germany abandoned the Deutschemark in 2002 when it joined the single currency.

The theory is that Germany's exit would prompt a steep fall in the euro, which would go some way to restoring the competitiveness of Germany's debt-strapped neighbors including Spain, Portugal, Greece and Ireland. Exports would rise, allowing them to put money aside to pay their debts and to service the future needs of their ageing populations.

In time, he said, Germany could consider rejoining the euro after a correction in the region's economic imbalance.

Read more about Edward Hugh's views on the euro crisis

Hugh believes Europe's problems are rooted in demographics; countries with a high proportion of young people have amassed debt which those with aging populations are now under pressure to service.

"If you look at the countries that have housing booms, the United States, Britain, Ireland, Spain -- they are all young societies. And the societies that have been paying for these booms like Germany, Japan, Sweden are much older societies who generate surpluses because of the dynamics of saving and borrowing," he said.

"This money is then lent to the societies that are still with sufficient proportions of people in the younger age groups who have been doing a hell of a lot of borrowing."

Hugh said demographics do not explain everything. "Having a good central bank and a sound monetary policy is useful. And structural reforms and high quality institutions also help a lot. It's not a one-sided thing," he said

He predicted that if Germany didn't leave the euro, pressure one day would be so intense that the country's political leaders would be forced to break free of the union by a population tired of bailing out its debt-stricken neighbors.

"There's no future for any country that is in the sort of mess that these countries are in -- they need the protection of the eurozone," he said.

"It is much more feasible for Germany to say, 'Hey guys 28 percent of our GDP -- and it is growing as a percentage now - is in exports that go outside Europe or outside of the eurozone. So what do we have to lose by coming out?'"

And remember that German debt is in euros so if the Germans went back to the mark it would be much cheaper for them to pay," he added.

Hugh told CNN that his rising popularity as an economic commentator had led to job offers of which he had no intention of taking.

"God no," he said almost incredulously when asked he could be tempted to leave his rural idyll in Spain.

"I moved here to get way from the office. All these offers I'm getting really, they can go and jump in the lake as far as I'm concerned," he said, before adding, "but I am certainly willing to help the IMF sort Spain out."

He knows they know where to find him.