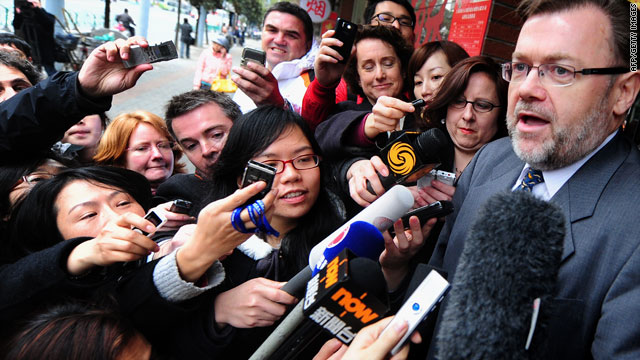 Beijing, China (CNN) -- The Shanghai court trying an Australian Rio Tinto executive on charges of bribery and theft of commercial secrets will deliver its verdict on Monday.

Australian consular officials will be in court when it renders its decision on the fate of Stern Hu, the Australian Department of Foreign Affairs and Trade said Thursday.

It was not immediately clear whether the court will also announce on the same day the verdict against three other Rio Tinto employees who were tried on the same charges.

The three-day trial of the four employees of the mining giant ended Wednesday.

Charged in the case were Stern Hu, an Australian citizen of Chinese origin who was the general manager of Rio Tinto's Shanghai office.

Hu has been in detention for nine months, along with Rio Tinto's three Chinese employees -- Liu Caikui, Ge Minqiang and Wang Yong.

Rio Tinto, a British-Australian company, is one of the largest mining companies in the world. The case has raised fears of a government crackdown on foreign companies doing business in China.

When is a gift considered bribery?

The trial was closed to foreign news organizations, hindering independent confirmation of developments.

Australian consular officials were allowed in the Shanghai courtroom for the bribery phase of the case, but were barred from witnessing the theft portion.

Hu is accused of receiving two bribes: one for 1 million yuan ($146,490) and another for 5.3 million yuan ($790,000). The Australian Department of Foreign Affairs and Trade said he "made some admissions concerning these amounts," but did not elaborate.

Hu and the others were detained in July. China says the four bribed executives from 16 of the nation's major steel mills to obtain industry information.

Rio Tinto has called the allegations surprising and said it was not aware of any evidence.

The detentions took place about a month after Rio Tinto broke off an investment deal with China state-owned Chinalco, a resources company, that was worth more than $19 billion.