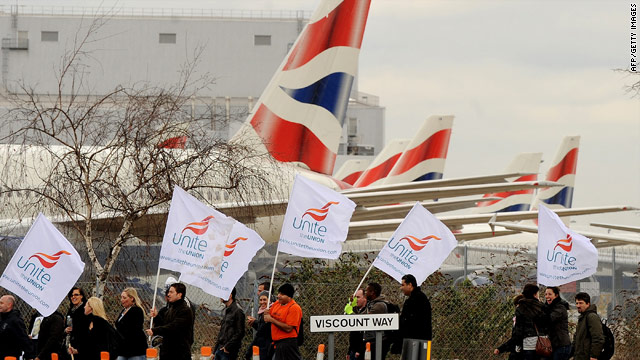 "Letters are going out to staff who took industrial action concerning staff travel," a statement from the airline said. "Our cabin crew knew that if they took part in the strike they would lose their staff travel permanently.

"Staff travel offers heavily discounted travel to airline employees. This is a non-contractual perk that the company can withdraw at its discretion."

BA Chief Executive Willie Walsh had threatened last week to take away the travel perks, which may have been one reason why some union staff agreed to work despite the strike last weekend.

Are you worried about the strike?

The airline said Wednesday it is expanding its flight schedules this weekend ahead of a second round of strikes because more staff are willing to cross the picket lines.

The planned four-day walkout follows the one last weekend by crews dissatisfied with pay, benefits and staffing levels.

BA will be able to run a full operation from London's Gatwick Airport and London City Airport this weekend because so many cabin crew members will be working as normal, the airline said in a statement late Tuesday.

"As a result of the numbers of crew wanting to work, we are increasing significantly our flying schedule and will be operating a full schedule at Gatwick and London City airports," Walsh said in a statement. "I would like to thank all our customers for their patience and support. I apologize to those whose flights will regrettably have to be canceled at Heathrow because of Unite's continuing action."

British Airways advised passengers to regularly check its Web site, www.ba.com, to see whether their flight is still operating. Passengers should contact British Airways or their travel agent instead of going to the airport if their flight has been canceled, BA advised.

BA says the changes will save the company more than 60 million pounds ($90 million) a year. Unite has said the plans, which call for longer work hours and less staffing, will damage customer service and the BA brand. In addition, stock analysts said BA has made clear it sees the action not only as a matter of money but who will run the airline -- management or the union.