BA operates about half of its flights amid strike 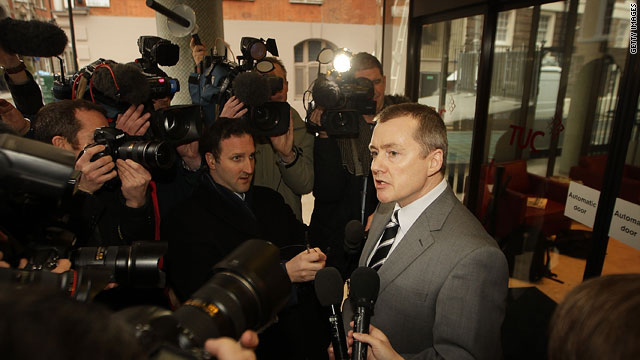 British Airways CEO Willie Walsh said the company will still try to operate as many flights as possible.
STORY HIGHLIGHTS

London, England (CNN) -- British Airways was operating roughly half its flights Saturday despite a planned three-day strike by cabin crew that started at midnight Friday.

But the airline said Saturday that it had gotten "off to a good start," with more cabin crew reporting for work at London airports and crossing the picket lines than expected.

"Cabin crew are reporting as normal at Gatwick and the numbers reporting at Heathrow are above the levels we need to operate our published schedule," BA said in a statement.

An airline consultant said that, if that continues, BA may be able to reach its goal of flying 65 percent of its flights during the strike.

"Things are going pretty smoothly," consultant Jamie Bowden told CNN. "What the union [is] going to hope is that things get more complicated as the week goes on, but British Airways, I think, will get a lot of confidence if the day goes smoothly."

"The strike is strong," said Ciaran Naidoo, a spokesman for the Unite union. "There has been an excellent turnout."

A statement on the BA Web site late Saturday said the airline is reinstating previously canceled flights because of the high number of crew members reporting to work.

But Unite said that 80 percent of cabin crew members had not shown up for work.

The statement said the airline is "planning to operate 60 percent of flights."

Teams of customer and crew support agents flocked Saturday morning to a terminal at Heathrow airport to try to help passengers and workers amid the confusion of the strike.

A captain and crew under contract to British Airways from Astraeus Airlines arrived at 6 a.m. and appeared confused about where to go. They walked the length of the terminal and were helped by customer support, but the captain still had to go to the assistance desk for directions.

Using such contract crews is one way BA hopes to minimize the strike's impact.

BA Chief Executive Willie Walsh has said the airline will be leasing aircraft and using replacement workers to achieve his goal of completing 65 percent of scheduled flights.

As of Saturday morning, 161 of BA's 347 flights at London's Heathrow, Gatwick, and City airports had been canceled. That means the airline was only able to operate about 53.7 percent of its flights out of London Saturday, short of Walsh's goal.

Members of the Unite Union, which represents most of BA's 15,000 cabin crew, planned to hold a rally Saturday near Heathrow in support of striking workers.

"These Unite members understand the pressures the recession places on the company," Unite said in a statement. "But they believe BA's future and 40,000 jobs depend on it staying a premier airline."

The two sides have been at odds for more than a year over changes BA wants to make to cabin crew pay and work practices.

British Airways says the changes will save the company more than 60 million pounds ($90 million) a year. But Unite has said the plans, which call for longer working hours and a cut in crew staffing levels, will damage customer service and the BA brand.

Walsh and the joint general secretary of Unite, Tony Woodley, met late into the night Thursday and again Friday, but failed to reach a compromise to avoid the strikes.

British Prime Minister Gordon Brown urged late Friday that the strike be called off immediately, saying in a statement he "believes that this strike is in no one's interest and will cause unacceptable inconvenience to passengers."

In addition to the three-day strike, Unite plans to strike for four more days beginning March 27.