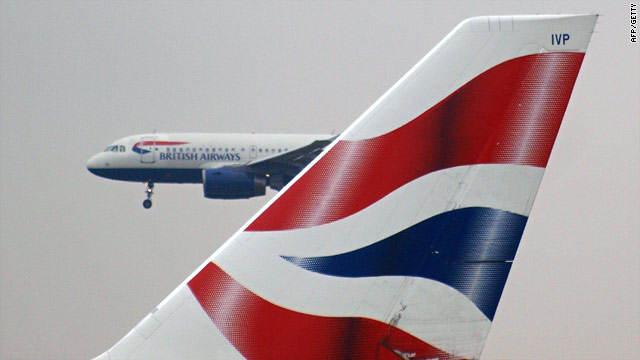 Passengers have a number of options open to them during the strikes, including canceling or rebooking flights.
STORY HIGHLIGHTS

London, England (CNN) -- Now that a planned cabin crew strike against British Airways is under way for the March 27-30 period, the airline has confirmed "a number of cancellations for flights," according to its Web site.

So what should you do if you're holding a BA ticket and planning to fly? Here is some advice.

Can I re-book if I am traveling during the planned strike period?
BA says that fliers have the choice of re-booking, whether their flight is cancelled or not. It says travelers can "rebook to travel on another BA flight on the same route up to 355 days in the future at no extra charge, subject to availability."

The airline says that passengers can also book an alternative BA flight from another destination at no extra charge although it will not cover expenses to the alternative airport.

Can I cancel my journey?
You can cancel you flight and if you decide to BA says it will refund your fare, whether or not the flight is cancelled because of strike action.

How will I know if my flight is cancelled?
BA is keeping its flight schedule updated on its Web site: BritishAirways.com. Passengers are advised to use their reference number to check if their flight has been cancelled. BA says that it is also informing customers via text and email.

How many flights will be cancelled?
This depends on the number of crew who ultimately strike and how well BA's contingency plans work, but a BA spokesman told CNN that it expects to carry about 75 percent of booked passengers on its own aircraft during March 27-30.

Will flights be disrupted outside the scheduled flight dates?
BA has confirmed that a number of flights will be disrupted between March 27-30. BA advises travelers to keep up-to-date with events on its Web site -- BritishAirways.com.

If your flight is operating between March 27-30 (excluding London City and London Gatwick longhaul) you can rebook onto another BA flight on the same route up to 355 days in the future. BA says no refunds are allowed unless the fare rules allow.

Can I switch airlines?
If you are thinking of booking flights with another airline, keep in mind that BA is not be obliged to refund your money, if the strike is called off and it can operate the flight as planned, warns the Air Transport Users' Council, Britain's consumer watchdog for the aviation industry.

Will British Airways help me cover the cost of meals and accommodation if I am stranded abroad?
BA will provide hotel accommodation to passengers stranded abroad because of the strikes. A BA spokesman was unsure if other expenses, such as food and drink, occurred during their enforced stay would be covered, although he suggested passengers could put in claims for "ancillary costs" with either BA or their insurance company.

How can my insurance help?
Cover provided by insurance policies vary, and passengers should check with their insurance providers, according to Rochelle Turner, a researcher at Which?, an independent consumer magazine.

Those who booked their flight using a credit card may be entitled to recover at least some of the costs, she said.