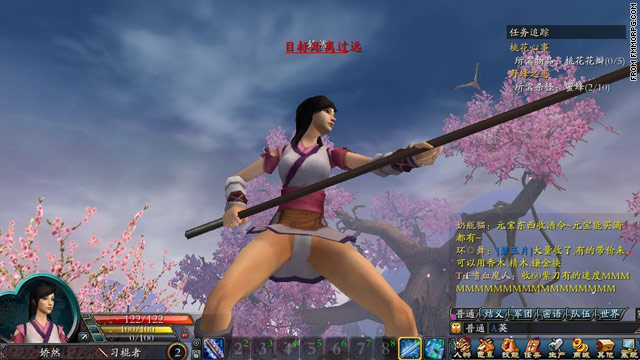 "It is similar to (World of) Warcraft, but the game adds more Chinese elements into it so I feel more connected to it," he said.

"Perfect World" is free to play, but Wang spends about $44 every month on virtual extras such as additional points, new equipment and even outfits for his avatars.

U.S. consumers may still be the world's top shoppers, but in the growing economy of the virtual world Chinese buyers like Wang are leading the way. Research firms estimate the purchase of virtual goods in China reached roughly $5 billion in 2009 -- about five times more than the United States.

The reasons why reveal something about the state of the Internet in China, the limitations local developers face and the innovative ways companies have capitalized on China's booming online market.

"China needed to do this," said Lucas Englehardt, chief executive officer of research exchange site BloggerInsight. "It didn't have the traditional avenues for monetizing content like in the United States, where there is lots of money to be made off of advertising, text and banner ads. In China, click through rates for advertising are much lower."

China has many more developers of online games and services than in the United States, a factor industry watchers say has encouraged competition and innovation. The crowded field, however, have fought to turn profits. Selling virtual goods, so far, has yielded the most success.

One of the best examples of this is industry leader Tencent, which operates the popular QQ Instant Messenger and social networking site Qzone. Virtual goods have become the company's primary source of profits. In the first half of 2009, Tencent took in over $300 million in revenue from Internet value-added services, a category dominated by virtual goods. By comparison, online advertising only drew $35 million in revenue.

Justin Smith, founder of the Inside Social Games, says China's far-sighted developers quickly created an infrastructure for users to pay for online goods. Utilizing mobile phones and prepaid cards to buy virtual currency is common in China, "whereas in the U.S. that is pretty rare and just beginning to grow," Smith said.

Virtual goods in social games have the potential to be huge
--Justin Smith, Inside Social Games founder
RELATED TOPICS

The business model is built around small individual purchases of around $1 to $2. That is a good fit for China's growing base on Internet users, many of whom still have limited disposable income.

"It's an impulse buy," Englehardt said. "You don't have to think much about it, even if you are not wealthy Chinese."

The flexibility of virtual purchases has hit a sweet spot with China's giant online gaming community. There are 70 million Chinese consumers who play at least an hour of online games a month, according to Niko Partners, a research firm that focuses on China's online gaming industry.

Unlike gamers in the United States or Japan, most Chinese gamers play online in part because of strict government regulations limits access to game consoles and software.

The free-to-play model, though popular everywhere, has struck a particular chord in China. Instead of full service subscription fees, Chinese online gaming firms offer more a la carte choices such as access to private chat rooms or avatar costume selection. "It gives them a lot more control over what they are buying," said Lisa Cosmas Hanson, Niko Partner's founder.

The virtual marketplace is far from complete. Most analysts agree the future most likely lies in the space where social networking and online gaming collide. The popularity of social network games, like "Happy Farm" or "House Buying," is growing rapidly in China, but virtual sales from these games still generate only modest revenues.

In addition to the promise of a broad, loyal consumer base, social games offer the appeal of interaction with one's friends and family in the real world.

"This could mean buying a virtual gift for a potential love interest, buying a power-up to defeat your old classmate in a friendly competition, or buying a nice accessory for your virtual home," Smith said. "Because everyone can relate to one of these situations in which virtual goods meet a real emotional need, virtual goods in social games have the potential to be huge."

CNN's Mu Dan and Sun Yu contributed to this report