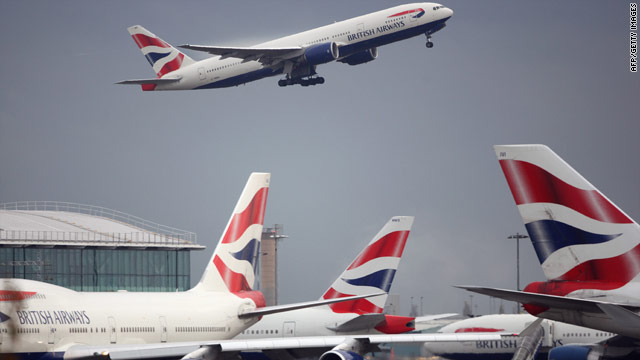 Walkout: The Unite union announced there will be two separate strikes in late March over disputed working conditions.
STORY HIGHLIGHTS

There will be no strikes over the Easter period, he said. Further strikes could be called if needed, he said.

Will a British Airways strike impact you?

British Airways, which lost hundreds of million dollars last year, responded by saying it is "extremely disappointed" with the union's decision. "We are very sorry for the stress and disruption Unite's decision will cause," the airline said in a statement.

"We are currently considering our response to this strike threat and what action we will need to take to minimize disruption."

The industrial action is over planned changes to cabin crew conditions, which BA says will save the carrier more than 60 million pounds ($91 million) a year.

Unite has said the plans call for working hours to be extended and crew levels to be cut, changes that it has said will damage customer service and the BA brand.

The two sides have been holding talks to avoid strikes. BA management submitted a formal offer to the union Thursday, Unite said, but added that the offer fails to address union concerns about crew numbers and service delivery.

That prompted Unite officials to announce the strike dates. There is still a chance the strikes could be averted.

Unite said union members will be able to vote on BA's offer on the first day of the planned strikes, and if they vote to approve it, the strikes will be canceled.

British Airways declined to share details of its offer with CNN. "Unite's action has no shred of justification," the airline said.

"British Airways' crew are rightly renowned for their professionalism and skills. Our entire package for crew recognizes that and is reasonable and fair."

BA said all union proposals so far would save the airline "significantly" less money than BA's own planned changes.

"In addition, Unite's plans would cut crew pay and allowances," BA said. "The reductions required to generate sufficient savings would leave each crew member between 1,000 and 2,700 pounds ($1,516 and $4,095) a year worse off. These proposals lack credibility, and Unite did not inform crew of them when it asked them to vote for a strike."

In December, a judge blocked a planned 12-day strike by Unite over the same issues that would have started just before Christmas.