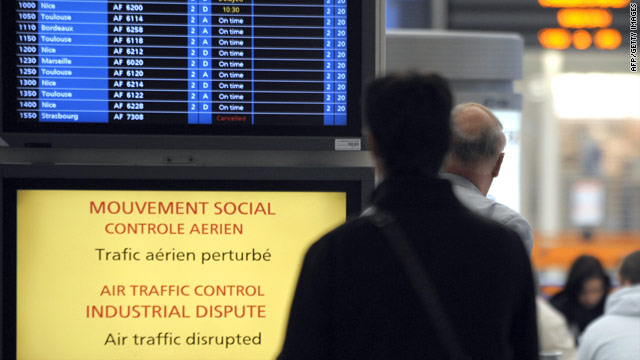 A passenger stands in front of a screen announcing an air traffic control dispute at Paris Orly airport.
STORY HIGHLIGHTS

(CNN) -- French air traffic controllers went on strike Tuesday as labor unrest continued to roll across Europe despite the suspension of a strike by Lufthansa pilots after just one day.

Half of Tuesday's flights at Orly Airport in Paris, France, were canceled, along with 25 percent of flights at Charles de Gaulle Airport, as a result of a planned strike by four civil aircraft staff, including air traffic controllers, for Tuesday through Saturday.

Authorities at French airports advised passengers to check with their airlines before traveling to airports.

The action comes a day after German-based Lufthansa and its pilots' union agreed to suspend its standoff and return to the bargaining table. The suspension will expire on March 8, barring an agreement before then, both sides said in a Frankfurt labor court.

Also on Monday, British Airways cabin crew voted to strike, although no dates were announced. A planned 12-day walkout by Unite, the union which represents the workers, during the Christmas holidays was blocked by a judge.

Are you fed up with all the strikes?

Video: Portugal's economy on the spot

Unite said it is continuing negotiations with the airline. Like Lufthansa pilots, British Airways staff are concerned about wages and job security as larger, older airlines deal with the twin blows of the global recession and increased competition from low-cost carriers.

"These are not mindless militants looking to bring the company down, these are ordinary, decent people who do a highly professional job, and very evidently they have a deep set of grievances," Len McCluskey, assistant general secretary of Unite told CNN.

European airlines were not the only ones hurting. Japan Airlines de-listed its shares from trading in Tokyo Saturday as part of its bankruptcy restructuring. And in Australia, Qantas Airlines announced this week it would eliminate first class travel from its flights.

Industry watchers expect to see more industrial actions at airlines across the world.

"The [airline] industry is going to be losing approximately $10 billion for 2009, and projected to be over $5 billion in 2010, so you're going to see a lot more of these kinds of issues crop up as airlines try to cut costs in the face of all these losses," said Rick Seaney, CEO of Farecompare.com.

"Airlines used to be able to fly with planes a quarter empty, now they have to fill them to capacity, which is causing all kinds of consumer issues as well, which hurts their brand and hurts the industry overall," Seaney said.

Beyond the airline industry, other labor disputes are spilling into industrial action in Europe. French gas giant Total said about 100 of 4,000 gas stations in the country are beginning to run out of fuel as a strike by oil refinery workers enters a second week.

And in Spain, trade unions protested on Wednesday in Madrid, Barcelona and Valencia against a government plan to raise the retirement age from 65 to 67.

It was the first major protest by the unions against Socialist Prime Minister Jose Luis Rodriguez Zapatero since he took office six years ago.

Spain is the only major industrial economy still in recession and has one of the European Union's highest unemployment rates, of 19 percent. For workers under 25, the jobless rate is 40 percent, the government reports.

The government plan to raise the retirement age to 67 aims to prevent, in the coming decades, the pension system from going bust, as Spaniards live longer and collect retirement benefits for longer periods, with a project declining number of workers paying in to the social security system, government officials have said publicly in recent weeks.

Widespread strikes are also expected in Greece Wednesday over austerity measures the government plans to implement to cut its large public debt, which has caused stock market jitters and concerns that sovereign debt problems will spill across the world.