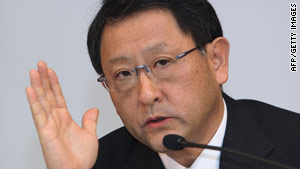 Tokyo, Japan (CNN) -- Toyota President Akio Toyoda said Wednesday he has no plans to appear before a U.S. Congressional committee next week.

His comments came during a news conference where Toyoda addressed reporters for the third time in two weeks about the massive global recall.

At the news conference, the company president detailed how Toyota will employ new quality control officers, conduct testing and will consult an independent research agency to fix their vehicle problems.

Toyota has recalled more than 8.1 million vehicles worldwide for problems related to sudden acceleration and unresponsive brake pedals, among other things. The company has apologized for the safety lapses and pledged to repair the recalled vehicles quickly.

Are we being too tough on Toyota?

On Wednesday, Toyoda said the company has found a fix for the Toyota Sai and Lexus HS 250h and began notifying owners about recall procedures.

The company is conducting "vigorous" testing on issues with the vehicles' throttle control system and will employ an independent agency to also test the system. The company will also release the results of the tests to the public, Toyoda said.

The company will hire quality control officers to be deployed worldwide, Toyoda said.

Toyoda also spoke about some technical changes that will be made to vehicles.

The company will add a brake override system to future vehicles that will cut engine power when the accelerator and brake pedals are applied at the same time. The company will put more data recorders in vehicles so that, technicians can use them to get valuable information on cars that malfunction.

Along with many disgruntled car owners, Toyota now is fielding questions from the U.S. government.

Regulators said Tuesday they have demanded documents from Toyota to determine if the automaker conducted its recent recalls in a timely manner.

The National Highway Traffic Safety Administration said it has ordered Toyota to provide documents showing when and how it learned of the defects affecting approximately 6 million vehicles in the United States.

Federal regulations require all automakers to notify NHTSA within five days of determining that a safety defect exists and promptly conduct a recall, the agency said.

Toyota has said it would cooperate with the request.

CNN's Kyung Lah and Kevin Voigt contributed to this report