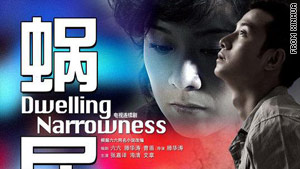 Beijing, China (CNN) -- As China posts another blistering quarter of economic growth, the property price boom fueled by the economy is causing drama of its own.

Also known as "Dwelling Narrowness" -- a Chinese phrase directly translated as "living like a snail" -- the 35-episode TV series follows the travails of the Guo sisters, Haiping and Haizao. To save up and buy a home, elder sister Haiping and her husband rent a shabby old attic and subsist on a diet of instant noodles -- only to find skyrocketing prices pushing their dreams of a new home beyond their reach.

Haiping finally sets her sights on a flat on the outskirts of the city, even though the couple could barely afford the 900,000-yuan (US$131,800) price tag. Their 20-year mortgage comes to nearly $900 a month, but their combined salary is only around $1300 a month.

The series dramatizes how investing in a home becomes an issue for extended family as well. Haiping's sister, Haizao, steps in to help her relatives pay for the 20 percent down payment by becoming the mistress of a high-ranking official in the city mayor's office. It ends tragically for Haizao when she suffers a miscarriage and her lover commits suicide after being accused of taking bribes.

The TV series has been a big hit among viewers who find empathy with the characters in the drama. "Paying the mortgage and eating [cheap] lunch boxes is a true reflection of the lives of many white-collar youths nowadays," wrote a blogger named Sui Han.

Netizens blame inflated property prices and official corruption for drama's tragedy. "The cruelty of life depicted by the drama strikes a responsive chord among every citizen who is obsessed by the high property prices," wrote Mr. Ying on the Tianya discussion forum.

Still, many urbanites have borrowed from banks, relatives and friends to buy a house, even if they end up as "fangnu", or "house slave, a colloquial term which refers to Chinese who spend a large part of their family income on a mortgage.

To pay off the mortgage, they refrain from changing jobs, spending money on entertainment or travel, and worry about falling ill.

But for the Chinese, worrying about house payments itself is becoming a health risk. A survey on the health of Chinese white-collar workers, released by the Chinese Medical Doctors Association, showed that buying property ranks as the top cause of pressure among 46 percent of the respondents, followed only by parents' health, difficulty in finding a spouse and children's education.