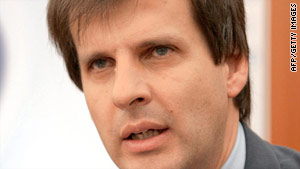 (CNN) -- Argentina's central bank president was removed from his post by presidential decree, a possible final blow in a political standoff between the banker and the executive.

But Redrado may not go easily.

Because of the decree, the central bank chief and his supporters were "already analyzing all available legal measures" to maintain his post, a central bank official familiar with the developments told CNN en Español. The source asked not to be identified because of the sensitivity of the issue.

Earlier this week, the president announced she had accepted Redrado's resignation after the bank chief declined to support a plan to use $6.5 billion in reserves to pay the country's debt. Redrado retorted that he had not resigned, and that only the Congress, not the president, could remove him.

Opposition politicians advised Redrado not to abide by the decree and to seek an injunction to protect his rights, the central bank source said.

The dispute appeared to stem from a government plan to use $6.5 billion in reserves from the Central Bank to pay down debt, something that the central bank, as an independent body, declined to do.

According to Redrado, the proposal should be studied to see if such a request should come from the congress, rather than the nation's president.

Sergio Berensztein, a professor at Torcuato Di Tella University in Argentina, said the outcome of the power struggle between Redrado and Fernandez de Kirchner could set a precedent of how Argentina deals with increasing government expenditures in the face of low government revenue.

Public spending is higher than government revenue in Argentina, creating the need to turn to the country's central bank.

However, Berensztein told CNN en Español that decisions to draw money from the central bank must come from congress, rather than presidential decree.

"The most important thing here is that there is a overstepping by the executive, in violation of central bank autonomy," he said.