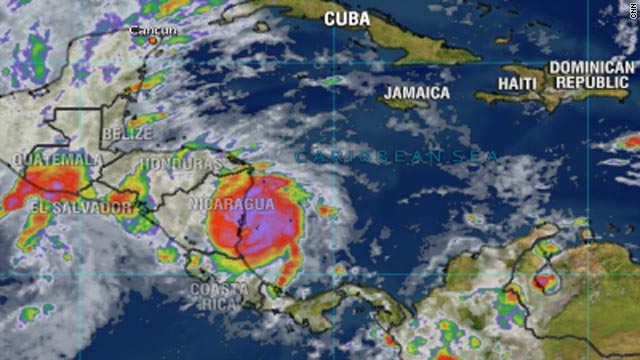 At 1 p.m. ET, Ida had maximum sustained winds of 65 mph (100 kph) with higher gusts, the National Hurricane Center said. It was earlier a Category 1 Hurricane with 75 mph winds.

Flash floods and mudslides in Nicaragua and Honduras are expected. Because Ida is a slow-moving storm -- it had been nearly stationary for the past few hours, the hurricane center said -- rainfall totals could approach 30 inches in some locations.

The storm is expected to weaken as it moves over Nicaragua and into Honduras, the National Hurricane Center said. Are you ready for Ida? Share your photos, videos and stories

Ida is forecast to emerge into the western Caribbean Sea on Saturday morning and then slowly move toward the north-northwest, brushing past Cancun, Mexico, on Monday afternoon. After that, forecast models offer a variety of possibilities as to which way the storm could head and how intense it could be. Ida, or remnants of the storm, could make landfall anywhere along the U.S. Gulf Coast late next week. It is too early to pinpoint a specific location.

Coastal flooding and dangerous riptides will be possible this weekend along coastal Louisiana and Mississippi because of an area of low pressure in the western Gulf of Mexico and a strong area of high pressure over the mid-Atlantic Ocean. Ida may contribute to the abnormally high tides early next week.