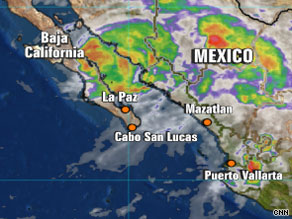 As of 8 p.m. ET, the center of Jimena was located near San Buenaventura, Mexico, and about 40 miles (64 kilometers) south of Santa Rosalia, Mexico. It was moving north at near 12 mph (19 kph), and was expected to turn northwest and slow Wednesday night before turning west on Thursday.

"On the forecast track, the center of Jimena will move over the central Baja California peninsula tonight and Thursday, then move into the Pacific west of Baja California late Thursday or Thursday night," the Hurricane Center said.

The storm's maximum sustained winds had decreased slightly, to 80 mph (129 kph) with higher gusts, the hurricane center said. Jimena is expected to weaken into a tropical storm Wednesday night, forecasters said. At its peak Tuesday, Jimena was a Category 4 storm, with winds of 145 mph (233 kph).

A hurricane warning remained in effect for parts of the Baja peninsula, from Bahia Magdalena north to Punta Abreojos on the west coast, and from San Evaristo north to Mulege on the east coast, the Hurricane Center said. A hurricane warning means hurricane conditions, including winds of at least 74 mph (119 kph), are expected within 24 hours.

A tropical storm warning and hurricane watch were in effect for the Baja California peninsula north of Punta Abreojos to Punta Eugenia on the west coast, and north of Mulege to Bahia San Juan Bautista on the east coast.

Jimena is expected to produce between 5 and 10 inches of rain over the southern half of the peninsula, with 15 inches possible on some areas. "These rains could produce life-threatening floods and mudslides," the Hurricane Center said.

In addition, "a dangerous storm surge along with large and dangerous battering waves will produce significant coastal flooding along the Baja California peninsula," forecasters said.

All About Hurricanes and Cyclones • Mexico • Baja California