One million displaced as typhoon slams into China 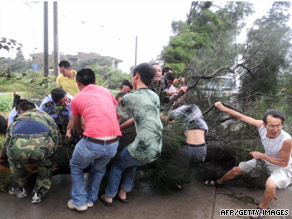 Residents gather to remove a fallen tree blocking a road in Changle, China, in Fujian province on Saturday.

High winds and torrential rain of Typhoon Morakot hit coastal provinces Fujian and Zhejian hardest, and caused the worst flooding in decades in Taiwan -- where flood waters as high as 7 feet were reported, China Daily reported.

The deadly typhoon swept across the Philippines and Taiwan's Hualien region before crashing into eastern China, claiming nearly two dozens lives along the way, the newspaper reported.

The storm -- measuring about 1,600 kilometers (about 1,000 miles) across -- continued to pummel coastal China Monday, but forecasters said it is unlikely that Morakot would reach Shanghai, the country's largest city, which sits further north along the coast.

Government officials expect the typhoon to cause more than 8.5 million yuan ($1.2 billion) in damages, the newspaper said.

The storm made landfall in the coastal area of Beibi Town, Xiapu County in Fujian province at about 4:20 p.m. Sunday (0820 GMT), according to China's state-run Xinhua news agency. Morakot's winds were clocked at 118 kilometers per hour (73 mph) in its eye, according to the province's meteorological bureau as cited by Xinhua.

Video from Taiwan showed a six-story hotel crashing into the floodwaters coursing below. The well-known hot springs resort had evacuated before the collapse.

At least seven people were killed, 32 wounded and 46 unaccounted for, according to Taiwan's Central News Agency.

In China, five houses were destroyed as the front of the typhoon brought flooding rains to Wenzhou City in neighboring Zhejiang province just after 8 a.m. Sunday, Xinhua said. Three adults and a 4-year-old boy were buried in debris about 8 a.m. Rescue workers were unable to save the child, and he died, the city's flood-control headquarters told the news agency.

A "red alert" -- the highest degree in danger levels -- was issued in Zhejiang, where more than 35,000 vessels were called back from sea, China Daily reported, citing provincial flood control officials.

More than 300 homes collapsed, and more than 16,000 hectares (39,500 acres) were flooded, Xinhua said. The city's airport was closed and 56 roads were rendered impassable.

As the eye of the storm reached Beibi, the sky turned completely dark, and people caught in rainstorms staggered as they used flashlights to see, Xinhua reported. Trees were being uprooted and torn apart by damaging winds.

Nearly a million people were evacuated from Fujian and Zhejiang provinces as Morakot approached. Late Friday, the storm lashed Taiwan, killing two people, wounding 15 and knocking off power to about 650,000 households, according to Hong Kong's Metro Radio.

Two others are missing, police said. Among the victims of Typhoon Etau was a 68-year-old woman who died when a landslide caused a hill to collapse on her home in Okayama prefecture, police said.

In neighboring Hyogo prefecture, an 86-year-old woman was found dead in her flooded house and a 54-year-old man in his submerged car. Officials expect the number of victims to rise as torrential rains continue.

All About Taiwan • Philippines • Weather • China