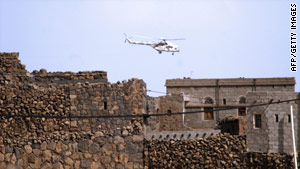 A security helicopter flies over Sanaa during an operation in December.
STORY HIGHLIGHTS
RELATED TOPICS

(CNN) -- A man described as "one of al Qaeda's most dangerous members" was arrested in Yemen, the Yemeni military, an embassy official and state-run news agency Saba said.

Mohammed Abdu Saleh al-Haudali, 35, is "one of the most dangerous terrorists wanted by the security forces," according to a Yemeni military Web site, citing a security source.

Al-Haudali was arrested Wednesday in the village of Deer Jaber in the Bajel district, northeast of the Yemeni capital of Sanaa, said Mohammed Albasha, spokesman for the Yemen Embassy in Washington.

Al-Haudali exchanged fire with security forces before his arrest, Saba reported, citing Hodeidah province security officer Abdul-Wahab al-Radhi. However, the Yemeni military site quoted the security source as saying al-Haudali was caught when he attempted to open fire on authorities.

Yemeni air forces have raided al Qaeda hideouts in Sanaa along with Abyan and Shabwa governorates, killing dozens of al Qaeda suspects, Saba reported. It did not say when the raids took place.

The arrests come after a Nigerian man allegedly attempted to detonate an explosive device on a Northwest Airlines flight from Amsterdam to Detroit, Michigan, December 25. Yemen-based Al Qaeda in the Arabian Peninsula claimed responsibility for the attack.

Suspect Umar Farouk AbdulMutallab spent time in Yemen, sources have said. His father, Umaru AbdulMutallab, contacted the U.S. Embassy in Nigeria several weeks ago to report his son had "become radicalized," and had gone to Yemen to participate in "some kind of jihad," a family source said.

A federal security bulletin obtained by CNN says the explosives used in the incident were obtained in Yemen.