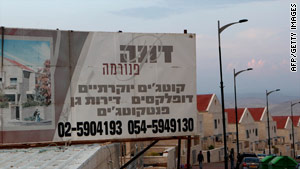 The Israeli Ministry of Housing on Sunday announced plans for construction of 692 housing units in three Jewish neighborhoods in predominantly Arab East Jerusalem.

After seizing East Jerusalem from Jordan in its 1967 war with its Arab neighbors, Israel claimed sovereignty over all of Jerusalem, though the claim is not recognized by the international community. Approximately a quarter of a million Palestinians currently live in East Jerusalem, and it is seen by some Palestinians as the future capital of their state.

The Palestinian Authority condemned the construction announcement and accused Israel of exploiting the inability of the international community to halt Israeli settlement building.

"The Israeli government proves every day that it is not ready for peace," said Nabil Abu Rdainah, spokesman for Palestinian Authority President Mahmoud Abbas.

The White House issued a statement Monday opposing the construction. "The status of Jerusalem is a permanent status issue that must be resolved by the parties through negotiations and supported by the international community. Neither party should engage in efforts or take actions that could unilaterally pre-empt, or appear to pre-empt, negotiations," spokesman Robert Gibbs said in the statement.

A U.S. official said the announcement was "not helpful" to the American-led effort to get Israelis and Palestinians back to the negotiating table after talks broke down in 2008.

A senior Israeli government official who was not authorized to speak publicly said the U.S. government had been notified of the housing construction before the announcement and said, "They have their opinion and we have ours."

In a statement, the European Union presidency said it was "dismayed" at the announcement.

"Settlements on occupied land are illegal under international law," the statement said. "The plans by the Israeli government to expand such settlements contravene repeated calls from the international community ... and prevent the creation of an atmosphere conducive to resuming negotiations on a two-state solution. The presidency of the European Union thus urges the government of Israel to reconsider these plans."

Last month, the government of Israeli Prime Minister Benjamin Netanyahu announced a 10-month freeze on new settlement building in the West Bank, but excluded East Jerusalem. In announcing the ban, Netanyahu appealed to the Palestinian Authority to take advantage of the 10-month "window" to resume negotiations.

"With each individual action it undertakes on the ground, Israel is saying no to meaningful negotiations, no to a just and lasting peace and no to the two-state solution," Erakat said in a statement Monday. "Today's announcement is further proof that this 'policy of three no's' still dominates the decisions taken by the Israeli government."

The Obama administration had requested the ban on construction in both Jerusalem and the West Bank this year as a way of jump-starting the peace process with the Palestinians.

International reaction to Netanyahu's freeze announcement has been mixed. The Obama administration said it was a step in the right direction. The Palestinian Authority, led by Abbas, has rejected the freeze as inadequate because it does not apply to East Jerusalem and is temporary in scope.