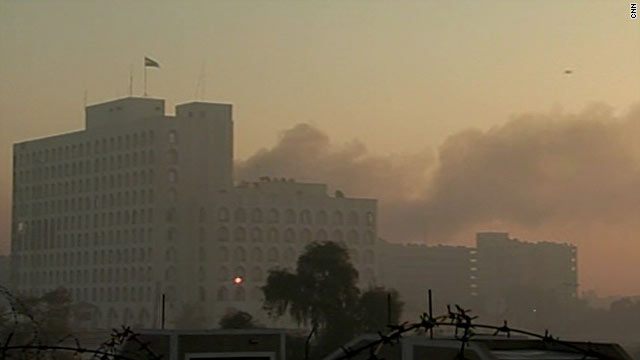 Three car bombs went off within minutes of each other in central Baghdad locations on Tuesday.
STORY HIGHLIGHTS
RELATED TOPICS

The blasts occurred near the fortified "Green Zone," which houses Iraqi government buildings and the U.S. embassy.

The first bomb detonated at about 7:25 a.m. in a parking area near the Ministry of Immigration and Displaced Persons. The second bomb went off near the Iranian embassy, and a third exploded near the Iraqi foreign ministry. All three bombings occurred within minutes of one another, according to the Iraqi official.

Though violence has been on a downturn in Iraq, Baghdad has suffered a recent upsurge, which some officials say are aimed at undermining upcoming elections, now set for March after a lengthy impasse in the country's parliament.

The violence came a week after a string of large-scale and coordinated suicide attacks killed nearly 130 people and wounded more than 400 in the Iraqi capital. Those bombings targeted two government ministries, a Baghdad courthouse, a commercial district and a neighborhood and were the worst since twin car bombings killed and wounded hundreds of people in late October.