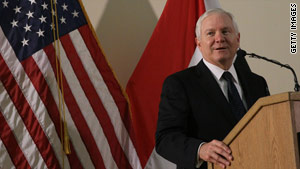 Gates, who was visiting northern Iraq on Friday, held a town hall meeting with about 300 soldiers and airmen in Kirkuk. He arrived in the country Thursday after a two-day trip to Afghanistan.

"I think you are going to see some significant additional sanctions imposed by the international community," he told the troops.

His comments came a day after the United States and other envoys warned that Iran faced tougher sanctions if it did not comply with U.N. Security Council resolutions. The envoys slammed Iran for transporting arms and ammunition to Syria, saying the clock is ticking for the Islamic republic.

"Patience is running out," said Mark Lyall-Grant, the British ambassador to the United Nations. "If there is no change of approach, then clearly the Security Council will need to look again at further sanctions against Iran in the new year."

Iran shocked the world in September with the revelation of a nuclear facility it had been building secretly in the holy city of Qom. Since then, it has allowed inspectors from the U.N. nuclear watchdog agency to visit the plant.

Before meeting the troops, Gates met with Iraqi Prime Minister Nuri al-Maliki, who had canceled a meeting with him a day earlier so he could discuss a devastating bombing with Iraqi lawmakers.