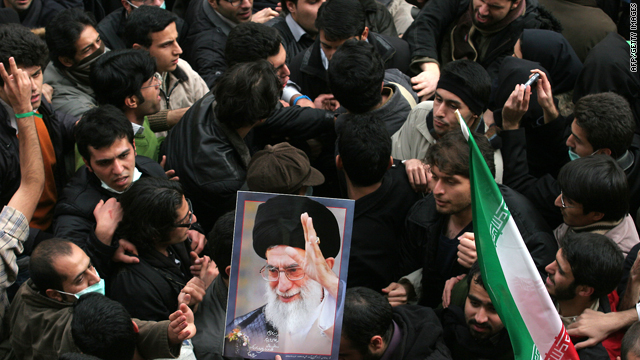 (CNN) -- The United States will not sit silently by and ignore what happens on the streets of Tehran, the U.S. deputy assistant secretary for Iran at the State Department said Thursday.

John Limbert, who was among diplomats held hostage by radical students at the U.S. Embassy in Tehran 30 years ago, told CNN's Christiane Amanpour, "We believe as we have always believed that the Iranian people deserve decent treatment from their government."

His comments came on the same day that U.S. President Barack Obama, during a lecture in Oslo, Norway, after he received his Nobel Peace Prize, declared the world is bearing witness to the struggle for rights and justice in countries such as Iran.

Obama's Nobel address came in the same week that tens of thousands of Iranian students took part in the biggest anti-government demonstrations in months, in a new indication that the protest movement remains defiant.

Limbert said he found it remarkable that the young people of Iran are willing to come back to the streets again and again. "Iranians have been seeking a voice in their own affairs and decent treatment from their government now for well over 100 years," he said. "Most of that 100 years, I would add, has been a history of frustration and defeat."

Iranian artist Shirin Neshat, who won the Silver Lion Award at the Venice Film Festival for her film, "Women Without Men" and is now a voice of protest outside Iran, expressed strong disappointment that the U.S. is not criticizing Iran in stronger terms.

"I feel that the students in Iran, the people of Iran, and the people of Iran outside of Iran are setting a great example of people who are truly fighting for democracy," she told Amanpour. "And this creates a sense of hope for the rest of the region, the entire world. But we don't feel that we have the sufficient support or the protection that is necessary."

In a reference to international concern over Iran's nuclear program, she added, "I think many Iranians inside and outside feel that they've been betrayed ... with this emphasis on the nuclear weapons issue. It has distracted the world from paying attention to the atrocity that is taking place today in Iran."

Tehran says its program is entirely for peaceful purposes. But the United States and other countries say Iran is trying to build nuclear weapons. The U.S., Britain, and France Thursday warned Iran it could face new sanctions.

Limbert would not say whether he believed more sanctions were required. He said, "We are looking at all kinds of measures to change this relationship and to persuade those in Iran to enter a more constructive relationship."

The Wall Street Journal's Deputy Bureau Chief for the Middle East, Farnaz Fassihi, said she believes the protests in Iran are getting more radical. "In fact, as the government of Iran has crossed many of the red lines, the opposition is also crossing the red lines and it's created this vicious cycle."

Fassihi said it's astonishing that protesters have continued to send out images of their demonstrations on the Internet, despite the government crackdown.

"It was remarkable to see that we know that the network that we have inside Iran of student activists -- both the opposition and the other side of the students -- were feeding us information," she said.

"They were e-mailing student information. They were updating it on Twitter. They were putting it on Facebook. And quite a number of bloggers and Iranian Web sites that operate from outside of Iran were streaming all of this information live."

Neshat said Iran's protest movement has reawakened the Iranian community outside the country and united it as never before.