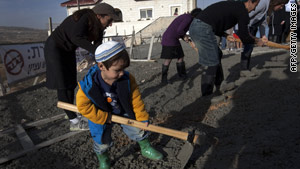 Efrat Settlement, West Bank (CNN) -- Leaders of the Jewish settlement movement poured concrete for the foundations of a synagogue Wednesday in this West Bank settlement south of Jerusalem.

The event, clearly organized for media exposure, was meant to send a message to the Israeli government of Prime Minister Benjamin Netanyahu that the settler community would not accept the 10-month building ban he ordered without resistance, according to settler activists.

Dany Dayan, chairman of the Council of Jewish Communities in Judea and Samaria, the official body representing Jewish settlements in the West Bank, said he is deeply disappointed with Israel's prime minister and expressed skepticism that the 10-month ban would end.

"How can you believe the words of prime minister that promised before the election that our community will flourish ... and now he freezes all of them? What kind of words can you say about a prime minister that before an election plants a tree at an outpost and then freezes construction all over Judea and Samaria?" he asked, using the biblical names for the West Bank.

Netanyahu, seeking to allay settler fears that the building ban would be indefinite, emphasized in a speech Tuesday that it would be of limited scope.

"This is a one-time and temporary decision," Netanyahu said. "Just as was written in the Security Cabinet decision, and just as I have made clear in both public and private meetings, we will go back to building at the end of the suspension."

The prime minister's words did not soothe the anger of settlers who continued for a third straight day to block government inspectors sent to enforce the ban.

An Israeli police spokesman said that when a police force entered the settlement of Beit Arieh, the entrance road was blocked by the head of the regional council and by council cars. All requests to clear the road were denied, and an officer was forced to arrest the council head, the spokesman said.

Similar confrontations erupted in other parts of the West Bank, where groups of settlers tried to keep away inspectors enforcing the ban. Banners have been put up at entrances to Jewish settlements declaring, "No entrance to the inspectors of Bibi's freeze," using the Israeli leader's nickname.

The Israeli newspaper Haaretz reported Wednesday afternoon that Defense Minister Ehud Barak had invited settler leaders to a meeting at his offices in Tel Aviv on Wednesday night in an attempt to lower tensions.

Netanyahu announced the 10-month freeze on new housing projects in the West Bank, but excluding east Jerusalem, last week after a meeting of his Security Cabinet. In announcing the ban, Netanyahu appealed to the Palestinian Authority to take advantage of the 10-month "window" to resume negotiations.

The Obama administration had requested the ban this year as a way of jump-starting the peace process with the Palestinians.

The international reaction to Netanyahu's announcement has been mixed. The American administration said it was a step in the right direction. The Palestinian Authority, led by President Mahmoud Abbas, has rejected the freeze as inadequate, because it does not apply to east Jerusalem and is temporary in scope.