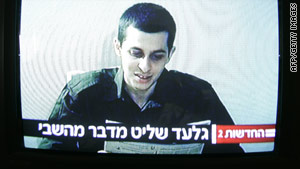 Jerusalem (CNN) -- Israel could release 980 Palestinian prisoners in a possible deal to win the freedom of an Israeli soldier held captive by Hamas for three years, prosecutors disclosed Sunday.

The number from Israel's State Prosecutor's Office is the first official estimate of how many Palestinians could be freed in exchange for Cpl. Gilad Shalit, who was captured in a 2006 Hamas raid near the Israel-Gaza border.

Prosecutors disclosed the number in response to demands, made by the families of Israelis killed by Palestinians, that the government disclose the terms of a potential deal with Hamas.

In papers filed with Israel's high court, the prosecutor's office said the government is considering an initial release of 450 prisoners in the first phase of a deal, with another 530 prisoners slated to be freed in a second phase. No prisoner names were released with the numbers.

Relatives of Israelis slain by Palestinians have petitioned the court to force the government to release more information about the details of a possible exchange. Many of them have been vocal opponents of plans to release prisoners they believe may commit acts of violence again.

Israel and Hamas have been negotiating Shalit's release through third-party mediators from Egypt and Germany, but talks have started and stalled numerous times. Shalit's freedom has become a condition for the Israelis to consider ending a blockade that has economically wounded the Palestinian territory of Gaza.

Speculation about a possible deal emerged last week after Israeli President Shimon Peres met with Egyptian President Hosni Mubarak in Cairo, Egypt, and hinted that the talks could be at a critical juncture. But Israel's government is obligated to publicly announce the list of any prisoners to be released and allow 48 hours for objections before a deal can take place.

Shalit was 19 when he was captured on June 25, 2006, by Palestinian militants from Gaza, including those from Hamas, the Palestinian faction that controls the territory. Israel immediately launched a military incursion into Gaza to rescue Shalit, but failed.

In October, Hamas gave Israel a minute-long "proof of life" tape of the captured soldier in return for the release of 20 female prisoners. The video showed Shalit sitting in a chair, reading a newspaper dated September 14, 2009, and saying he was in good health.