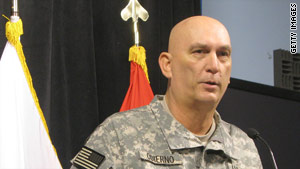 Baghdad, Iraq (CNN) -- The Iraqi parliament passed an amended election law Monday, but it failed to address concerns of the country's Sunni Arab vice president. That raised doubts about whether nationwide elections will take place as constitutionally required in January.

A nationwide election in Iraq is seen as barometer of Iraqi progress toward stability and a requisite for the United States to withdraw troops by summer. U.S. military officials have said they will begin to draw down combat forces about 60 days after the polling.

Gen. Ray Odierno, the top U.S. commander in Iraq, last week said there will be some flexibility on withdrawal dates.

"In terms of difficult decisions about troops, again, that's a long way off," he said Wednesday. "I think we are set up and we're flexible enough from between now and the first of May, frankly.

"And so I feel very confident that I don't have to make any decisions until late spring -- and that would then be based on if we believe that there is some sort of instability that would be created that would significantly change the path that Iraq is on. And if that happened, then we would have to go back and get further guidance from Washington, but I don't see that happening right now."

Kurdish leaders had threatened to boycott the election unless certain changes were made; the law parliament passed Monday included revisions the Kurds had sought.

Parliament passed an election law last week, but Iraqi Vice President Tariq al-Hashimi, a Sunni Arab, vetoed it. He urged changes to increase the number of seats in parliament allocated to refugees, many of whom are Sunni Arabs.

According to Iraq's constitution, the presidency council -- made up of Kurdish President Jalal Talabani, Shiite Vice President Adel Abdul Mehdi and al-Hashimi -- must unanimously approve a bill for it to become law. With the changes al-Hashimi urged not included, he is likely to again veto this version of the law.

After a second presidency council veto the legislation would return to parliament, where a two-thirds majority vote would be needed to overturn the veto.

This already time-consuming process may even take more time as parliament on Monday adjourned until December 8 for the Muslim Hajj pilgrimage and the Eid al-Adha holiday at the end of November.

Iraq's constitution sets January 31 as the latest date for national elections. But meeting that deadline does not seem possible anymore, raising concerns of instability if the current government is seen as illegitimate after that date.

The country's Independent High Electoral Commission has said a January vote is unlikely at this stage. Saying it will need 60 days to prepare for the polls, the electoral commission suspended its elections preparations after al-Hashimi's veto last week.

U.S. Secretary of State Hillary Clinton weighed in on the situation Monday.

"We believe, on balance, that there will be elections," she told reporters. "They might slip by some period of time until this is worked out, because at some point the law has to be in place for the planning to begin, and so there necessarily needs to be a period of time in which the planning can occur.

"But we have every reason to believe that elections will be held, which will be another milestone on the journey that Iraqis are taking toward full and comprehensive democracy."

CNN's Jomana Karadsheh and Yousif Bassil contributed to this report.