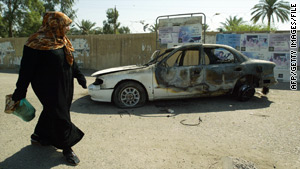 A woman walks past a burned-out car after the 2007 incident in which Blackwater security personnel killed 17 people.
STORY HIGHLIGHTS

(CNN) -- A former vice president of the Blackwater private security company said he was "unaware of any plot or guidance for Blackwater to bribe Iraqi officials" as rage erupted over the killings of 17 civilians by the company's security guards more than two years ago.

Cofer Black made the comment after The New York Times reported in its Wednesday editions that Blackwater, now operating under the name Xe, "authorized secret payments of about $1 million to Iraqi officials." Xe passed along his statement to CNN.

Iraq is probing the report, and Black denied actions the Times' sources said he took after allegedly learning about the payments.

He did say he had met with U.S. Embassy officials during the "period described" in the Times report "to discuss the best course of action" in the aftermath of the September 2007 shootings in Nusoor Square. The company had been providing security for diplomats and the sprawling U.S. Embassy compound in Baghdad.

"Blackwater was directed to provide some financial compensation to relatives of those Iraqi victims, which embassy officials described as called for by Iraqi custom," Black said.

Video: Bolani: 'Blackwater has a problem'

In an exclusive interview with CNN, Iraqi Interior Minister Jawad al-Bolani said the ministry is investigating the issue, and he asked the appropriate commanders to prepare a report about the Times article and to follow up on the matter.

"My door is open to anyone with any complaints or information about this and I hope they provide me with any information that may help with the investigation," he said.

The Times report, which attributed the information to former company officials, said the money was "intended to silence" Iraqi criticism and "buy their support" after the deadly incident, which exacerbated the feelings of many Iraqis that private American security contractors have operated since 2003 with little regard for Iraqi law or life.

Blackwater said its employees were returning fire after armed insurgents attacked them, but an Iraqi investigation concluded that the guards randomly fired at civilians without provocation.

According to the Times article, four former executives said former Blackwater president Gary Jackson OK'd the bribes. They said "the money was sent from Amman, Jordan," the report said, to a "top manager in Iraq."

Black "learned of the plan from another Blackwater manager while he was in Baghdad discussing compensation for families of the shooting victims with United States Embassy officials," the sources told the newspaper.

"Alarmed about the secret payments, Mr. Black cut short his talks and left Iraq. Soon after returning to the United States, he confronted Erik Prince, the company's chairman and founder, who did not dispute that there was a bribery plan, according to a former Blackwater executive familiar with the meeting. Mr. Black resigned the following year," The New York Times report said.

The Times said four former executives agreed to speak on the condition of anonymity. It said two of the executives said "they took part in talks about the payments" and "two others said they had been told by several Blackwater officials about the discussions."

While saying he didn't know about any bribery plot, Black also denied he had ever "confronted Erik Prince or any other Blackwater official regarding any allegations of bribing Iraqi officials."

Iraq's al-Bolani said the government has made a dent in the battle against bribery and want to get to the bottom of this and other claims of corruption.

"This issue is being carefully followed up on," he said. "We will not allow anyone to damage Iraq's reputation and the reputation of Iraq's institutions. But if there are any bad individuals or individuals involved in illegal activity, we will not go easy on them and the most severe legal measures will be taken against anyone who could be involved and is proven to have been involved in this and they will be referred to the judiciary."

The Nusoor Square incident touched a nerve in Iraq; al-Bolani called it a "major national tragedy."

"No Iraqi can ever forget it, but the Iraqi government was committed and acted responsibly for the sake of the Iraqi people and the reputation of Iraq," al-Bolani said.

Because of the killings, the U.S. State Department decided not to renew Xe's main contract in January after the Iraqi government's refusal to renew the firm's operating license.

Despite this, the company has continued to operate in Iraq, with activity such as providing aviation services for the State Department, but al-Bolani said it is phasing out its work.

Citing its commitments and activities with some Iraqi institutions, he said he believes the company is "in the process of completing some arrangements," a process that could be lengthy.

Triple Canopy, based in Herndon, Virginia, has taken over the main contract from Xe in Iraq.

Al-Bolani -- asked what he thought about the fact that Triple Canopy has hired former Blackwater employees -- said there will be no problems so long as law is obeyed.

"The important thing that everyone should know, when the Iraqi government and its institutions take certain measures, they do not want to punish all individuals," he said. "The incident that happened and other incidents and violations that took place were caused by certain individuals."

Al-Bolani said he expects the improving security situation to lessen the need for private companies.

Xe continues to hold contracts with the State Department to protect American diplomats elsewhere in the world. Prince resigned as head of the business in March, but he remains the owner of the company.