Gaza City (CNN) -- Poverty-stricken Gaza, where even the most basic goods are in short supply, has spawned its very own financial scandal -- centered on the tunnels that run under the border with Egypt to circumvent the Israeli blockade.

Palestinians desperate to pull themselves out of poverty were encouraged to invest in the smuggling tunnels constantly being built in the border town of Rafah.

There is big money to be made from operating a tunnel -- they are the main economic lifeline for Gaza -- but some of those who collected money for construction disappeared without building any tunnels. Estimates of how much was lost vary widely from $100 million to $500 million.

Hamas, the organization which rules Gaza but also has a military wing that Israel and the U.S. considers a terrorist group, is trying to get the money back.

Hamas says they have two suspects in custody and are trying to find some of the missing money for investors.

It's not just investors who are losing out on the tunnels. One worker, who declined to give his name, said: "I did not get paid -- almost $1,000 for three months' work. Where am I supposed to get compensation from?"

Abu Ismail, a tunnel merchant, says he hates the tunnels and cannot wait for the day Israel lifts the blockade and goods can enter Gaza above rather than below ground.

"I want to go to the park at the end of the day, not go looking for my son inside a tunnel digging for a living and finding him dead inside the tunnel," he said. 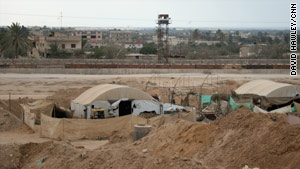 Hundreds of tunnels snake under the Gaza-Egypt border and thousands of Palestinians find work smuggling in motorcycles, fridges, food, cigarettes, livestock -- whatever Gazans want and can't get because of the blockade. Israel says some of these tunnels are used to smuggle in weapons.

In Rafah market, there's a plethora of electrical goods smuggled through an underground world where the work is dirty, back-breaking and fraught with danger.

The landscape near the Egyptian border changes on an almost daily basis. As soon as Israel bombs a tunnel, or a tunnel collapses -- often burying workers alive -- work on another tunnel begins.

With Gaza's unemployment estimated at up to 80 percent, the financial lure of the tunnels is hard to resist. Children run away from home to work there, and there is big money to be made for tunnel operators.

The initial cost of up to $100,000 to build the tunnel is soon recouped as operators charge merchants an average of $5,000 a ton for the goods they smuggle.

The number of children recruited to help dig the tunnels is a growing problem. Children are small and easily tempted by money.

One boy who told CNN he almost died in a tunnel collapse cannot be more than 14. Others say there are boys as young as 12 working underground.

Dr. Iyad Saraj, Gaza's leading child psychologist said: "There is a pushing factor for the children, pushing them out in the streets because the house is so deprived. And there is a pulling factor in the tunnel business or any business to tell them, 'You can make some money there.' So the children are entangled into this cycle."

Saraj said there have been cases of runaway children earning $100 a day in the tunnels -- a high wage for Gaza. But the risk is also high -- 59 Palestinians have died in the tunnels this year.