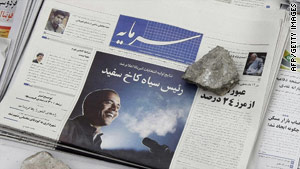 The paper called Sarmayeh has been critical of President Mahmoud Ahmadinejad's economic and monetary policies in the past, according to Press TV.

The paper's editor, Saeed Laylaz, was also arrested in the aftermath of Iran's June 12 presidential election and charged with instigating post-vote unrest, the network reported.

The business paper is not the first periodical to be shuttered this year.

The newspaper, Etemad-e Melli, was ordered closed in August for what had been described as "publishing unlawful and criminal material," local news outlets reported at the time.

The newspaper is aligned with Iranian reformist Mehdi Karrubi, who lost in the controversial presidential election.

That newspaper was shuttered shortly after Karrubi printed accusations that post-election detainees in Iran were raped behind bars.

Karrubi, along with opposition candidate Mir Hossein Moussavi, ran against Ahmadinejad in the June 12 election. Despite reformists crying foul, Iran's election authority declared Ahmadinejad the overwhelming winner, driving hundreds of thousands of Iranians to the streets in protest.