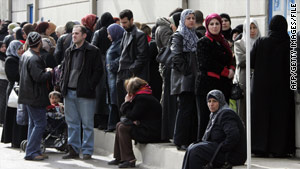 (CNN) -- In what the World Food Programme called a first, relief workers from the U.N. aid agency are using text messages to deliver food vouchers to refugees.

The four-month pilot program kicked off last week in Syria, geared toward 1,000 refugee families from Iraq. If the pilot succeeds, the Food Programme plans to expand it beyond Damascus and to other countries.

They save families from traveling great distances to a distribution site and stand in long lines -- often a challenge for women and the disabled, she said.

Virtual vouchers also help refugees avoid the transportation costs and storage difficulties tied to collecting two months' worth of rations at a time.

"It infuses some contribution to the communities, because we're not giving food away. They have to go to the local shops to buy it," Etefa said.

The voucher program works this way: Iraqi refugees in Damascus receive a text message on their mobile phones, delivering a code. They take the electronic voucher to select shops and buy items such as rice, eggs or lentils, which often can't be included in conventional aid baskets.

The vouchers are for two-month periods. Each family receives one voucher per person, worth $22.

If the family doesn't use the entire amount on their first trip, they receive an updated balance via another text message.

More than 1.2 million displaced Iraqis live in Syria, having fled the war and subsequent insurgent violence in their homeland. The Food Programme provides assistance to some 130,000, most of whom have mobile phones.

"Many times, they have trouble finding houses or run out of resources and have to move outside the city. The mobile phones are their main method of communication with anyone," Etefa said.

The Food Programme has previously sent text messages to refugees. They were limited to announcing aid distribution sites and times, however.

Though aid groups have used phone messages and smart cards to relay cash and information, the Food Programme thinks its pilot is a first in distributing food vouchers.

"As far as the WFP, it is the first in the world for us in terms of food vouchers," Etefa said. "I don't know if another country has something like this."