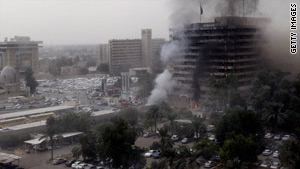 Baghdad, Iraq (CNN) -- More than 60 people responsible for security in the area of Baghdad where bombers killed 160 people this week have been detained amid growing criticism of a security breakdown in the capital.

Maj. Gen. Qassim Atta, spokesman for the Baghdad Operations Command, confirmed the detentions but did not say whether the people were negligent or complicit in the attack. However, the detentions come amid sharp criticism in Baghdad of security forces, including a call from the Baghdad provincial council for the sacking of senior security officials, including the interior minister.

Of 61 people detained, 11 were officers, including senior police and army commanders, and 50 were security forces, Atta said. They had been responsible for security in Salhiya district in central Baghdad, where suicide blasts targeted government offices Sunday.

One of the bombs exploded outside Baghdad's provincial building, the other outside the Justice Ministry. The bombs detonated in quick succession about 10:30 a.m., officials said. At least 540 people were wounded in Sunday's attacks, the deadliest in the country in more than two years.

The location is very close to the Foreign Ministry, and many people were shocked that the attackers were able to hit an area where security was supposed to have improved in the past two months. Some government officials, such as Baghdad Gov. Salah Abdul Razzaq, whose office was targeted, asked how the suicide bombers passed through multiple checkpoints.

Abdul Razzaq said security forces made mistakes and were negligent in their work, and he demanded a court-martial for those who allowed explosive-laden vehicles to get through checkpoints.

"If this was complacency, let all those responsible for this be held responsible," he said. "We should be decisive about this and have a public court-martial. ... Enough, no nation can put up with this."

The blasts also sparked questions about the ability of Iraqi security forces to maintain proper security in the upcoming national elections, scheduled for January.

In August, more than 100 people were killed in a series of bombings that led to tightened security in Baghdad. Blast walls were installed across the city and checkpoints added.

Two years earlier, three truck bombings killed hundreds in Qahtaniya, in northern Iraq. Sunday's attacks were the deadliest for Iraqi civilians since the blasts in August 2007.