JERUSALEM (CNN) -- Israeli President Shimon Peres rejected a United Nations report on his country's incursion into Gaza as "one-sided" and "unfair" in an interview with CNN. 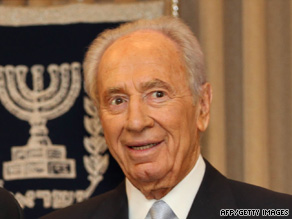 The U.N. Council for Human Rights last week approved the report, which accuses both Israel and the Palestinian movement Hamas of "actions amounting to war crimes, possibly crimes against humanity" during the three-week offensive which ended in January.

Peres insisted that Israel had a right to defend itself, and said the United Nations was in danger of "supporting the terrorists instead of supporting the fight against terrorists.

"If you can't fight terrorists, then ... nobody is defending us. We never asked any other people to fight instead of us, but the right of self-defense is non-negotiable," Peres said during Monday's interview. Watch Peres speak to CNN

Israel said its offensive in Gaza, which it called Operation Cast Lead, was designed to stop Palestinians from firing rockets and mortars into Israel from Gaza, which is controlled by Hamas.

There is an ongoing dispute about the number of people killed in Operation Cast Lead.

The Gaza-based Palestinian Center for Human Rights put the death toll at 1,419 and said 1,167 of those were "non-combatants." The Israeli military released its own figures earlier this year, saying that 1,166 people were killed, 60 percent of whom were "terror operatives."

Peres also warned that the international community must maintain its focus on keeping Iran from developing nuclear weapons.

"At the beginning the purpose of the negotiation was to prevent a nuclear bomb," he said.

"I am afraid that now people are moving from prevention to inspection. It's not the same, particularly when it comes to Iran," he said.

Israel prefers peaceful means to prevent a nuclear-armed Iran, Peres said, but he left open the door to a military attack.

"I think if it can be settled by peaceful means -- by sanctions or on other ways to impress the Iranians -- better than a war. I don't think that we have to announce all the options ahead of time," he said.

He remained typically evasive about whether Israel has nuclear weapons. Many experts believe it does.

"We are aware that Israel is being suspected that we have nuclear bombs. I answer this with a smile," he said. "If we are suspected, that's enough. If suspicion can serve as a deterrent, that is our purpose."