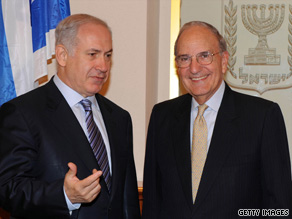 Talks between American diplomat George Mitchell and Netanyahu focused on efforts to restart the stalled Israeli-Palestinian peace process, and the two men agreed to continue their discussions in the coming days, the minister's office said.

He also plans to talk with Palestinian leaders in the West Bank, including Palestinian Authority President Mahmoud Abbas on Friday and Prime Minister Salam Fayyad on Saturday, the U.S. State Department said.

Mitchell returned to the region this week to advocate peace negotiations between Israelis and Palestinians, but significant obstacles remain.

It's Mitchell's first visit to the region since President Obama met with Netanyahu and Abbas in September in New York -- a discussion that ended with a failure to get the two sides to agree on peace talks.

The dim odds of a breakthrough on Mitchell's trip were underscored by comments that Lieberman made Thursday to Israeli public radio.

"Those who think that we can within the coming years reach a global deal that will end the conflict do not understand reality. They are sowing illusions," he said.

"We have to be realistic -- we will not be able to reach agreement on core and emotional subjects like Jerusalem and the right of return. ... I am going to say very clearly -- there are conflicts that have not been completely solved and people have learned to live with it, like Cyprus."

Abbas has said the Palestinians will not return to negotiations until Israel freezes construction in settlements in the West Bank and stops building in East Jerusalem. The United States has pressured Israel to do so, but Netanyahu's government has declined, saying instead that it will limit construction in the West Bank and continue to build in East Jerusalem.

Meanwhile, persuading Abbas to relent on his demand for a freeze on settlements may be much harder than it was just weeks ago. It's become more difficult because of the Palestinian Authority's decision to defer action on a U.N. report criticizing Israel for committing war crimes during its six-week military offensive in Gaza. About 1,000 Palestinians and 13 Israelis were killed during the offensive in December and January.

Many Palestinians have rebuked Abbas and his Fatah-affiliated Palestinian Authority for its decision. Hamas, the rival Palestinian faction that controls Gaza, has called it treason.

The criticism has weakened Abbas politically and made it harder for him to back down on his insistence that Israel stop building settlements before Palestinians return to the negotiating table.

Mitchell made a similar trip to the region in mid-September, spending a week talking to Netanyahu and Abbas in hopes of brokering a deal ahead of their meetings with Obama in the U.S.