RAMALLAH, West Bank (CNN) -- The harsh reality of life and death in Gaza is a common theme for Palestinian filmmakers. 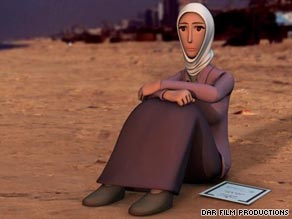 A still from "Fatenah," the first commerical animation to come out of the Palestinian Territories.

But it was the 2004 death of a young Palestinian woman -- not at the hands of a militant attack or an Israeli incursion -- that struck a note with two filmmakers.

Their animated film, "Fatenah," is inspired by her struggle with breast cancer, which is still a sensitive subject in the Palestinian territories.

"The amount of trouble she has to go to just to survive, you feel somehow committed to be part of that project, it is so strong and so emotional," director Ahmad Habash told CNN.

Fatenah, which tells the fictional story of a young seamstress from a Gaza refugee camp, is the first commercial Palestinian animation film ever made.

The heart-wrenching tale follows Fatenah's pain and humiliation as she struggles to leave Gaza for treatment after finding few Palestinian doctors willing to help.

At first, one doctor suggests she loosen her bra, while another says her condition will probably go away once she marries. It takes six months for Palestinian doctors to treat her concerns seriously and diagnose her with breast cancer.

Fatenah becomes tied up in Israeli and Palestinian bureaucracy, denied treatment until it is too late. It is a devastating tale that Habash said is not unique.

"The Shata refugee camp, which exists in Gaza ... represents any refugee camp and [Fatenah] could be any woman," he said. "The story could happen again."

The film's executive producer Saed Andoni said it was a gamble telling such a tragic story using animation. But he believes that bet has paid off.

"I think the animation has softened the harshness of the topic," he said. "Breast cancer and illness and death and Gaza and the siege, it's all heavy stuff, it's all harsh stuff. Put it in an animation style, give it a new dimension, give it a new perspective."

At a screening in the West Bank city of Ramallah, audience members wept after hearing Fatenah's story, saying they related to her plight.

One scene shows Fatenah checking her breast for lumps. The filmmakers hope this will help to break down barriers around a subject that is still very hidden in the region.

"It's very taboo to speak about the woman's body in Palestinian society, but in the film it happens and nobody criticizes and nobody says anything about it," Andoni said. "They accept it."

The film breaks new ground by dealing with matters often swept under the carpet in Palestinian society. Andoni said the film's greatest endorsement came from the father of the woman whose real-life story inspired the film.

The woman's father said he cried when he watched it. "It's a very human story and if it can touch the real family, it is a great moment," Andoni said.