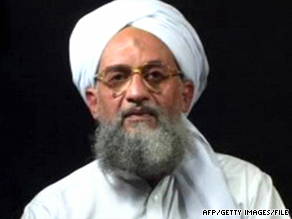 Ayman al-Zawahiri uses the message to eulogize Ibn al-Sheikh al-Libi, an accused terrorist who said he was tortured into making a false connection between al Qaeda and Iraq. Human rights monitors said in May that he had died.

He refers to al-Libi as "a veteran fighter in repelling the attacks of the hypocrite agents who were working for the crusaders against the mujahedeens."

Islamic radicals use the term "crusaders" to refer to Christians and the West.

Al-Zawahiri's message was filled with threats similar to those seen in past messages. "It will be about your blood and the draining of your economy until you stop your crimes, you arrogant tyrants," he says, according to a CNN translation.

Octavia Nasr, CNN's senior editor for Middle East affairs, said, "This falls within al Qaeda's propaganda and its continued attempts to keep itself relevant. In a climate where al Qaeda's effectiveness and capability to carry out attacks are being questioned, the organization continues to pump propaganda videos where al Qaeda leaders take turns eulogizing members killed in attacks or in jail."

All About Ayman al-Zawahiri • Al Qaeda